Praveen Kumar announces retirement from all forms of cricket

Praveen Kumar has announced retirement from all forms of cricket, ending his 13-year professional career. However, the veteran pacer will be available to play for ONGC and aims to dabble in coaching now.

Thanking BCCI, Kumar said his decision to retire was a well thought-out one and that he felt ‘it was the right time.’

I have decided to retire from cricket, the 32-year-old was quoted as saying by The Indian Express on Saturday. “The decision is not taken in haste, I gave a thought over it and I felt it was a right time to say goodbye to the sport which gave me so much. I want to thank my family, BCCI, UPCA, Rajeev (Shukla) sir for giving me the opportunity to fulfill my dreams.

Kumar began his international career as a promising young bowler capable of generating prodigious swing. He made his international debut in an ODI against Pakistan in 2007 and the following year played in his maiden T20I. It wasn’t before 2011 that he finally got the chance to play Test cricket. The Meerut-born pacer played his domestic cricket for Uttar Pradesh.

However, a combination of injuries and dip in form saw him being pushed to the sidelines. In six Tests, he took 27 wickets at an average of 25.81 while in 68 ODIs, he picked up 77 wickets at 36.02. He also played in 10 T20Is and had managed eight wickets in them.

its been a great jounery.

Its been a great life.

But the test cap no 268 nd ODI 170 will be mine till indian cricket era will continue… Thankyou @BCCI nd @UPCACricket for helping me to live up my dream.

He was part of the India squad for the ICC World Cup 2011 but was unlucky to be ruled out after picking up an injury.

I have no regrets. Dil sey khela, dil sey bowling daala (I played and bowled with my heart). There are good bowlers waiting in the wings back in UP and I don t want their careers to be affected. Mein kheloonga toh ek ka jagah jayega, (If I play, one spot would go); it s important to think of other players future as well. My time is over and I have accepted it. I m happy and thankful to god for giving me this chance, Kumar said.

One of the top moments from Kumar’s international career came in the 2007 Commonwealth Bank Tri-series in Australia where he starred for India picking up 10 wickets in six four matches that included six scalps in the two finals as India went on to win the series. 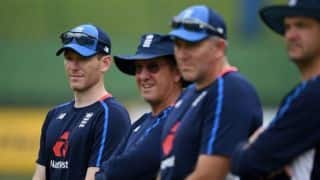 Sri Lanka vs England 2018, 4th ODI, LIVE Streaming: Teams, Time in IST and where to watch on TV and Online