Praveen Kumar: Playing with Kookaburra ball in subcontinent a problem

Praveen Kumar: Playing with Kookaburra ball in subcontinent a problem

Having toiled on the flat pitches of Bangladesh in the Asia Cup last month, India medium-pacer Praveen Kumar says bowling with the white Kookaburra ball in the sub-continent is a "problem". 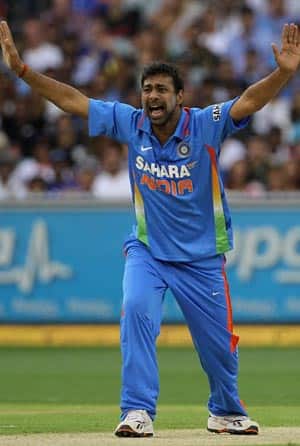 Having toiled on the flat pitches of Bangladesh in the Asia Cup last month, India medium-pacer Praveen Kumar says bowling with the white Kookaburra ball in the sub-continent is a “problem”.

“There is a problem with the white ball on the flat sub-continent wickets. First few overs it’s manageable but if the wickets are like that in Bangladesh then both the new balls are an advantage to the batsmen,” Praveen told PTI today.

“First 10-15 overs it is good for the batsmen as the ball comes onto the bat nicely, so there is a problem on sub-continent wickets with the white ball,” he added.

India could not defend the Asia Cup title after the team lost to Bangladesh in a high-scoring encounter last month.

They, however, managed to beat Sri Lanka and Pakistan but that did not prove enough to guide them to the final.

Praveen, who earlier missed India’s tour of Down Under due to blunt chest trauma, said he has fully recovered from the injury and was shaping up well for the event.

“Injury is part and parcel of the job. I believe consistency doesn’t become a problem when you return from an injury,” he said.

The bowler also defended his Indian counterparts for a miserable show in England and Australia saying it was a collective failure.

“Our bowlers did well in England and Australia. We performed well on both the tours, its just that in some matches we didn’t click as a unit. Some (practise) matches were washed off because of rain. As a team we gave our 100 per cent,” Praveen, who is set to represent Kings XI Punjab in the fifth edition of the Indian Premier League, said.

Talking about India’s new bowling coach, Joe Dawes who plays a similar role for the KXIP, Praveen said he was enjoying working with the Australian.

“Joe is a very good person and doing a fine job. We are enjoying his company over here. He is helping the bowlers with his experience. So far I have enjoyed working under him,” Praveen said.

The Meerut lad said his franchisee was parctising hard and were confident of putting up a good show in the IPL.

“Team morale is high, everyone is practising hard and ready to give their 100 per cent. We are confident of doing well in the tournament,” he said.

Asked about his role as a lead bowler for the KXIP and bowling in tandem with likes of newly recruited Stuart Broad, the bowler said he was upbeat.

“I am confident of performing well and lead the KXI bowling attack. The mood in the camp is upbeat and my body is fit and fine,” he said.

Praveen also mentioned that Adam Gilchrist’s coaching tips were helping the boys in the nets.

“He is a very good player and his coaching tips are helping the boys at the session,” he said about the coach-cum-captain of the team.

Asked whether his body was ready to take the burden of six-weeks of non-stop cricket, Praveen said, “I am absolutely fine, there are no injury issues. I am practising hard under the guidance of our bowling coach Joe Dawes.”

About the World Cup triumph, the bowler said he never felt bad about missing the chance to represent his country in the marquee event.

“I never felt bad that I missed the world cup because India won it and thats itself a great feeling,” he said.

MS Dhoni opines India had mixed success in past one year