Prayas, all of 16 years and 157 days, replaced Afghanistan's Mujeeb-ur-Rehman as the youngest player to start an IPL game (Mujeeb was 17 years and 11 days).

Prayas Ray Barman, who on Sunday became the youngest player to make an Indian Premier League (IPL) debut when he turned out for Royal Challengers Bangalore, apologised to his father first thing after the game in which his side lost crushingly to Sunrisers Hyderabad by 118 runs.

“He had a bad day. In fact the entire team had a bad day. I spoke to him after the game. The first thing he said was sorry. He knows I set high standards,” Kaushik Ray Barman told IANS.

“This is just the beginning for him. He has to work very hard,” he added.

Prayas, all of 16 years and 157 days, replaced Afghanistan’s Mujeeb-ur-Rahman as the youngest player to start an IPL game (Mujeeb was 17 years and 11 days).

He had a forgettable debut as RCB lost to Sunrisers Hyderabad by 118 runs and the tall leg-spinner was carted for 56 runs off his four overs with Jonny Bairstow and David Warner scoring the bulk of the runs against him.

Prayas’s first over wasn’t bad as he went for only six runs. But once Bairstow and Warner got the measure of him, they kept unleashing the big strokes.

Prayas then came out to bat – at number eight – when the game was more or less over for the Royal Challengers. He put up a decent show, however, scoring 19 and hitting two boundaries.

Bengal coach-cum-mentor Arun Lal rated him highly, even going on to say Prayas has the wherewithal to play for India if he continues his rapid progress.

“He is a terrific talent. He has to keep learning and learn fast. If he does that, he has the potential to play for India in two years’ time,” Lal told IANS.

Asked if he could make the Ranji Trophy squad next season, Lal said: “He can as he has the ability.”

Prayas has so far played nine List A and four T20 matches for Bengal.

RCB shelled out Rs 1.50 crore for Prayas in the auctions. Prayas recently played in the Syed Mushtaq Ali T20 Trophy where he picked up four wickets from as many matches at an average of 16 and an impressive economy rate of 7.11.

His best bowling figures of 4/14 in the tournament was against Mizoram in Cuttack. Prayas then broke into the India B team that played a quadrangular series, also involving India A, South Africa A and Afghanistan A. 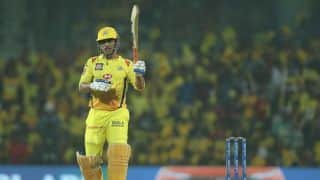