Preity Zinta, in a long post on Facebook, has claimed that what was reported on Thursday morning was a 'blatant' lie.

Kings XI Punjab (KXIP) co-owner Preity Zinta has clarified that the incident reported by a Mumbai tabloid following her side’s defeat to Royal Challengers Bangalore (RCB) is false. Zinta, in a long post on Facebook, has claimed that what was reported on Thursday morning was a ‘blatant’ lie, and such journalists should be ‘sued for defamation’. KXIP lost to RCB by a narrow margin on 1 run, following which a report emerged in a Mumbai tabloid that Preity lashed out at coach Sanjay Bangar in the team dugout right after the loss, and even used profane words. FULL CRICKET SCORECARD: Kings XI Punjab vs Royal Challengers Bangalore, IPL 2016 at Mohali

On Thursday afternoon, Preity posted a long note on Facebook rubbishing the report and giving her account. This is what she had to say:

“A perfect example of How Journalists LIE BLATANTLY & should be sued for DEFAMATION ! For the record I do have manners & I did go to school so Mr. Vijay Tagore either apologize or bring forward ur so called Source as you are guilty of slander. I most definitely DID NOT be disrespectful to our coach nor abuse any one & definitely did not use the FOUR LETTER WORD. Your story reeks of SEXISM and is incorrect & exaggerated beyond words. (sic) ALSO READ: Did Priety Zinta threaten to sack KXIP coach Sanjay Bangar?

I did speak to Veeru [Virender Sehwag] & Sanjay [Bangar] for exactly 20 seconds and asked why Axe [Akshar Patel] did not bat after which I congratulated Virat Kohli & spoke to him briefly as he walked up to me. After which I proceeded to have a chat with Shane Watson & then left the ground with my husband & In Laws as we were in one car & I was disappointed.

My mother & Brother stayed back as she was to go to the presentation ceremony & they were traveling in another car. I will not deny that I was disappointed but how dare any journalist cook up a story with me as a Villain. Just because I do not Support “PAID MEDIA or MEDIA NET” does not mean I am a soft target.

Sanjay & I BOTH have DENIED this story STILL it gets Printed. I am fed up of this nonsense & negativity. Just because our judicial system is slow some Indian Journalists time and again use it to write ANY & EVERYTHING & make soft targets of celebrities. Mumbai Mirror has been in the forefront of writing stories which are factually incorrect time & again & it’s getting both alarming & disgusting.

Also I’m amazed at the chauvinist & sexist undertone to your article. Just because I am a woman you presume me to be a bimbo & know nothing about Cricket even though I have been working in this sport and business for the past 9 years. For the record I do know more about the game than you do about journalism. My question to you is – would you have written the same thing if you were writing about another man in cricket ? So now either Mr. Vijay should prove this story true of face the consequences.

I like the way this journalist compares owners & coaches in Europe. Really ? In Europe Mr. Vijay you would not get a job as a journalist cuz instead of reporting facts u cook them up so technically you would be sued by now & yes I do have every right to ASK a legit question.

You wanted a statement from me but whatever I said to you & my PR you CONVENIENTLY forgot to print it & preferred to call it cryptic text messages Amazing !

Also I’m amazed at my picture used in this article. A perfect example of a B grade masala flick. Shame on you.” 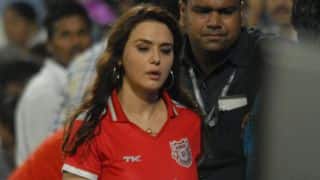