The signing serves as another major boost to the emerging tournament, which already has Shahid Afridi and Kumar Sangakkara signed on.

The announcement came as a double celebration for the Jaguars who unveiled culinary innovators Bueno Insta Pizza Private Limited as a team sponsor.

Sammy has been a prolific player in many T20 tournaments, including Australia s Big Bash League (BBL), Pakistan Super League (PSL) and the Indian Premier League (IPL). Moreover, as a former West Indian cricketer, he boasts a T20I strike rate of almost 150 and has played international cricket for over 12 years.

The signing serves as another major boost to the emerging tournament, which already has Shahid Afridi and Kumar Sangakkara signed on.

Darren Sammy is a stalwart of the game. His celebrations with the pacifier and champion dances have won him countless fans across the globe. More than that, he is a very astute cricketer, who can contribute with the bat, ball and strategies, said the team coach, Afzaal Haider.

Sammy posted a video to fans in Hong Kong saying he was looking forward to playing in Hong Kong and stated, Miss it, and you miss out

Haider reiterated that Sammy is a marquee player, and is one of the match-winning stars to look out for. With only four matches to play before the potential final, the team is going all out to ensure victory is achieved.

Hong Kong T20 Blitz Tournament Director Max Abbott said; It s been a huge week for the tournament with Afridi, Sangakkara and now Darren Sammy signing on for the Blitz. Credit to the Jaguars for bringing such a popular player that is one of the most entertaining characters in world cricket. It s going to be a huge boost for cricket in Hong Kong.

The tournament starts March 8-12 on 2017, and all the matches will take place at the Tin Kwong Road Recreation Ground. Stay tuned to the social media and website of Hung Hom JD Jaguars for more details on Yess Pizza, how fans can interact with Darren Sammy, and a lot more! Fuss-free Hashim Amla pleased to be back in the runs 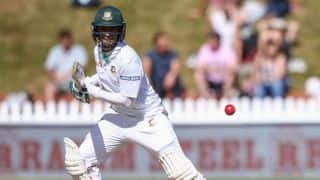