Pressure will be on India, says Sri Lankan coach Bayliss

Pressure will be on India, says Sri Lankan coach Bayliss 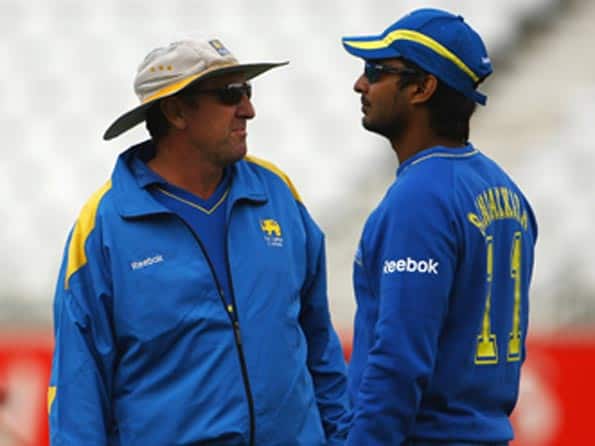 The world record holder, suffering from hamstring and knee injuries, skipped practice on Thursday at the Wankhede stadium, raising doubts of his availability for the title clash.

But Bayliss said the off-spinner, who turns 39 next month, was determined to take the field in his last international match. “Chances are good that Murali will play,” the coach said. “He completed 10 overs in the semi-final, and such is the character of the man that he will play even with discomfort.”

Sri Lanka are also sweating over all-rounder Angelo Mathews, who picked up a side strain during the semi-final win over New Zealand in Colombo on Tuesday.

Veteran seamer Chaminda Vaas, 37, and off-spinner Suraj Randiv are being flown in as cover for the injured duo, but Bayliss confirmed Sri Lanka had not applied to the International Cricket Council for replacements.

“We have asked for them just to be on the safe side, but Muralitharan and Mathews will be given as long as possible to prove their fitness,” the coach said.

Bayliss was confident Sri Lanka had a good chance to win their second World Cup title after 1996. “We have played good cricket through the tournament and have done well against India in the past,” he said.

“The pressure will be on India since they are playing at home, but we are familiar with the conditions in Mumbai.”

While India will be playing at the refurbished 33,000-capacity Wankhede stadium for the first time, Sri Lanka beat New Zealand by 112 runs in a league matcha at the ground on March 18.

Sri Lanka, runners-up to Australia in 2007, marched into their second successive final after losing just one match out of eight in the tournament.

Kumar Sangakkara’s men, playing at home in Colombo, thrashed England by 10 wickets in the quarter-final before delivering a five-wicket blow to New Zealand in the semi-final.

Sri Lanka have prevailed in recent one-dayers against India, winning six of the 10 matches played last year in Dhaka, Harare, Bulawayo and Dambulla.

But India have won five of seven matches against the Islanders on home soil over the last five years.

Pak, New Zealand & Ireland can look back at the World Cup with pride & hope