Sri Lanka s lower order could very well put up a fight with Rangana Herath and Dushmantha Chameera next to come.

Day Four could have been the final day of the first Test between South Africa and Sri Lanka but it was not to be. Sri Lanka s batsmen on a flat Port Elizabeth surface accumulated runs without much trouble all through the day. South African bowlers on the other hand toiled hard but eventually picked 5 wickets that has given them the advantage moving into Day Five. Kusal Mendis, Kaushal Silva, Dimuth Karunaratne and Angelo Mathews kept Sri Lanka in hunt as Sri Lanka is only 248 runs adrift from a win. Kagiso Rabada and Keshav Maharaj secured wickets late into Day Four to help South Africa inch closer to a win.

Day Five, South Africa perspective: With only five wickets to achieve South Africa head into Day Five with much-needed momentum. Early morning lateral movement will surely help the likes of Vernon Philander and Kyle Abbott. Philander so far in the second innings has not picked up a wicket, can very well make Day Five his morning. Abbott on the flipside was unlucky not to grab a few wickets on Day Four; DRS kept him at bay.

Maharaj will be a key bowler in the scheme of things for South Africa on a pitch that is offering turn and bounce. Much will also rely on which Rabada comes on the field to bowl, having seen him have pretty much a dull game.

Day Five, Sri Lanka perspective: Sri Lanka will have their in-form batsmen Mathews and Dhananjaya de Silva in the middle to chase the remaining 248 runs. Mathews has played a solid and a flawless game so far batting on 58. Alongside him is the top scorer from first innings de Silva. De Silva in his knock of 43 showed his technical abilities against the moving delivery. If the pair can snitch up a 100-plus run stand Sri Lanka could very well have a foot in the door.

Sri Lanka s lower order could very well put up a fight with Rangana Herath and Dushmantha Chameera next to come. Herath used his long-handle to good result while Chameera showed how steady he could be in his defence. Suranga Lakmal and Nuwan Pradeep too can wield their bat. 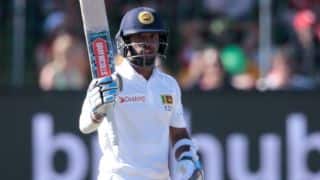 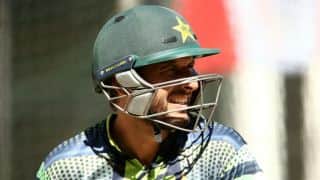