Australia coach Mickey Arthur vowed his team will go for the West Indies' jugular in the third and final Test even if their full throttle assault backfires. 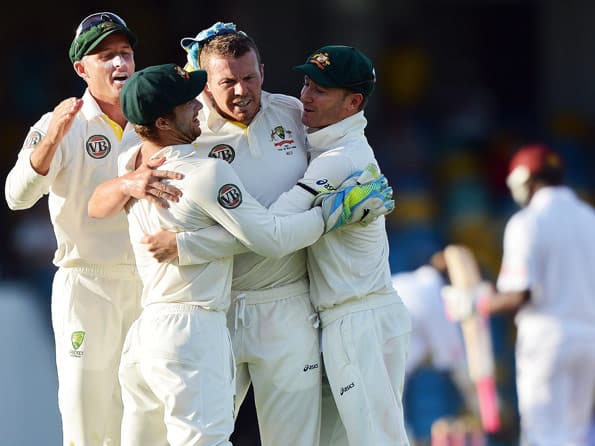 Australia coach Mickey Arthur vowed his team will go for the West Indies’ jugular in the third and final Test even if their full throttle assault backfires.

Australia have already ensured they will keep the Frank Worrell Trophy they have held for two decades after winning the first Test in Barbados and then seeing the rain-hit second match in Trinidad peter out into a draw.

But Arthur said his side will continue their positive approach, which was highlighted by two sporting declarations made by skipper Michael Clarke in the first two games.

“I’d rather lose a Test match trying to win it than just play dull cricket, because then you don’t learn anything about your players,” said Arthur, ahead of the final Test which starts at Windsor Park on Monday.

“You want to see players stand up in pressure situations. I’d rather that we went all out to win a game rather than just let a game meander.”

Australia face a selection dilemma after fast bowlers Peter Siddle and James Pattinson were both forced to return home with back injuries.

That means Ryan Harris, man of the match in Barbados before being rested in Port of Spain, may be recalled while left-armer Mitchell Starc could also get the nod if the pitch looks likely to favour pace.

In Trinidad, Australia played two specialist spinners in Nathan Lyon and Michael Beer while paceman Ben Hilfenhaus remains the visitors’ top wicket-taker with eight at an average of under twenty.

“When you lose two of your quality quick bowlers it does disrupt plans just a little bit,” admitted Arthur.

“They’re world-class bowlers so it is a bit of a pity but we cater for that. We felt Ryan needed a break. We’re going to have him fit and ready to go and we’ve got Starc, who has been fantastic all tour, to take his spot if we decide to go with three seamers.

Windsor Park has only staged one other Test when India were the visitors 10 months ago and the match was drawn.

Shivnarine Chanderpaul earned the man of the match award, scoring a century and a half-century in a low-scoring affair.

The ground has been used in this year’s regional 4-day competition and each match has also seen batsmen struggle with only one innings total above 300.

For the West Indies, Fidel Edwards, who bowled some excellent spells without luck in Trinidad, has some back soreness.

He was the most successful bowler for the West Indies in the previous Test at Windsor Park.

Ravi Rampaul, who is set to replace him, last played a Test in November 2011. He has been recovering from a bout of dengue fever and a shoulder problem.

West Indies will also be looking to seamer Kemar Roach to keep the pressure on Australia.

In Trinidad, he became the first West Indian since Curtly Ambrose in 1993, and the fifth West Indian overall, to pick up a 10-wicket match haul against Australia.

Kirk Edwards, with an injury to his left knee, has been withdrawn and replaced by the uncapped, left-hander Assad Fudadin.

He has only scored two centuries in eighty first-class innings, but both of those came in the recent regional 4-day competition.(AFP)