Under normal circumstances, a side which has won seven games in a row would have gone into a match as favourites. One would have to say that they would still be favourites to beat their opponents, but may just need to be a tad wary of being over-confident. 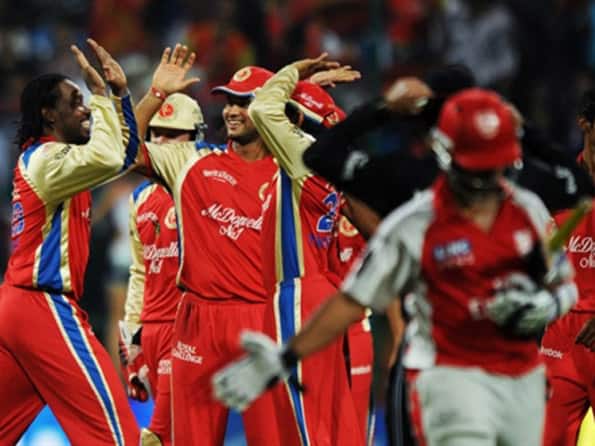 Under normal circumstances, a side which has won seven games in a row would have gone into a match as favourites. One would have to say that they would still be favourites to beat their opponents, but may just need to be a tad wary of being over-confident.

For one, Kings XI Punjab, their opposition in the 63rd IPL game this season, also go into the match with a string of three wins in a row. Then again, somewhere down the line, Bangalore would be expected to lose, whether by the dint of law of averages or because they decide to rest a few of their key players before the start of the playoffs. They would certainly prefer winning everything that came their way but if they lost, they will not want to go into the playoffs with a loss to their name.

If the experimentations did have to happen, it could be in this game.

Not that the Bangalore side would want to stop a rolling juggernaut. By his own admission, Gayle has never been so consistent. Providing the really quick starts is one thing, but doing that in six of the seven games one has played in, is quite another feat. Especially in a format which associates itself with a lot of superlatives but consistency.

Bangalore will have Gayle open the innings as he has always done. Who goes out with him will be interesting given that it was Luke Pomersbach who had last opened with him in place of Tillakaratne Dilshan.

Where Bangalore could look at experimenting is to have the batsmen lower down the order, like an AB de Villiers or a Saurabh Tiwary get their quota of batting at the top.

Charl Langeveldt s inclusion has taken the pressure off Zaheer Khan s shoulders and that has helped the side as a whole. It is a surprise that he wasn t thought of an option earlier.

Punjab will be quietly buoyant. They haven t had the best of starts in the tournament because of Adam Gilchrist and David Hussey s run of poor form but that hasn t deterred them from soldiering on grittily. Dinesh Karthik s found his runs while Shaun Marsh continues to wage that lone battle.

Interestingly, Piyush Chawla was given the sack two matches but got his chance when Praveen Kumar fell ill. He was kept in the side despite Praveen s return and picked up a man of the match award against Delhi. How he bowls to a batting line-up that loves to take on the bowling will be an interesting match-up.

A loss for Punjab will push them out of the tournament. It will also give Bangalore an excellent chance of finishing amongst the top two sides of the league stage.

Dalai Lama to give IPL match a miss