The horror seems far from over as an injury-ravaged Indian cricket team gears up for the third cricket one-dayer against England on Friday still looking for that elusive win which would lift the sagging morale of the battle-weary side. 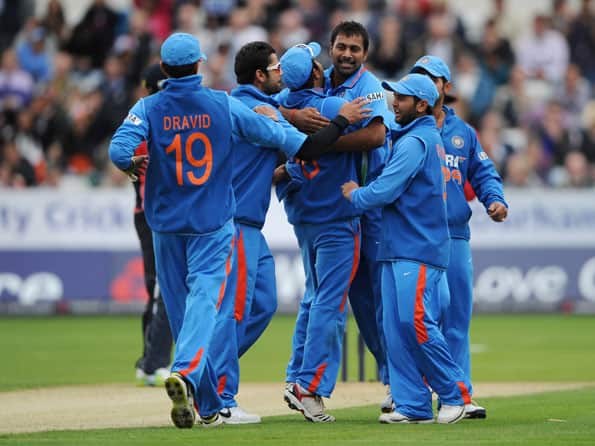 Though batting looked promising in the two ODIs, the bowlers need to deliver in the upcoming matches if India has to win the ODI series Getty Images

The horror seems far from over as an injury-ravaged Indian cricket team gears up for the third cricket one-dayer against England on Friday still looking for that elusive win which would lift the sagging morale of the battle-weary side.

Trailing 0-1 in the five-match series after being whitewashed 0-4 in the Tests, Mahendra Singh Dhoni and his men have reasons to feel fatalistic ahead of the day-night encounter.

The visitors are worried on the count of lack of bowling firepower in their ranks and are resigned to the fact England would chase down any total they can rustle up in remaining one-dayers.

Dhoni laid himself bare to media after losing the second one-dayer at Rose Bowl on Tuesday, fretting about the sameness of his fast bowlers and their general lack of pace.

“If it doesn’t swing, we struggle. Most of our bowlers are in the 120-130 kmph range and it becomes very difficult,” or words to similar effect was Dhoni’s lament and tomorrow could just make his worst fears come true.

The pitch at the Oval offers bounce but no sideways movement and the gentle pace of Indian seamers could turn out to be fodder for England batsmen.

Dhoni concedes Praveen Kumar is not his best option in death overs and he is forced to keep Munaf Patel a lot towards the end than in the initial overs.

If India can’t strike early, it is a given that the rest of the overs would be savaged by the in-form England batsmen.

A similar thing occurred in the second one-dayer where India ran up a decent total but were powerless to stop England from romping home with seven wickets to spare.

The crushing dominance was evident when England were 100 up on the board with 10 full overs yet to be completed.

As if this was not enough, India is also worried on the count of fifth bowler’s quota — a job Yuvraj Singh used to do with such aplomb in the past.

In the rain-hit second match, it fell on Virat Kohli and Suresh Raina to do the job but it would be beyond them to remain useful over a stretch of 10 overs.

That makes the inclusion of Ravindra Jadeja a strong possibility. The Gujarat all-rounder is a useful left-arm spinner and can add up a decent package with his notable fielding and batting.

His inclusion would almost surely bring the aspirations of Manoj Tiwary for the rest of the series to a premature end.

Ironically, India’s batting showed little effect of downturn despite losing so many stalwarts up the order.

Parthiv Patel and Ajinkya Rahane have been startlingly good up the order. Virat Kohli has shown good intent and Suresh Raina is laying about the bowling with a streak of vengeance.

Thus England could sense a killing in the rest of the matches. The pitches at the remaining three venues are unlikely to help seam and swing.

Indians might be a depleted lot but England would take immense delight in prevailing over the visitors and ending the summer in style.

England wouldn’t take their foot off the pedal for it’s a good practice opportunity for them to iron out their one-day follies.

For one, they are not seen as particularly adventurous in initial overs. The issue was met squarely by England openers in the second one-dayer.

Another issue is their rather timid approach in death overs. The hosts would be keen to sort this out too.

England have largely been an orthodox unit in one-day cricket. They are now bringing in a new set of players who can resort to unorthodox tactics.

Men like Craig Kieswetter and Ben Stokes are being primed for such roles. Their bowling in death overs has received a boost with the arrival of Jade Dernbach.

It being a day-night fixture, both sides would be keen to win the toss and bat first. Luck has been seen as an important ingredient in Dhoni’s extraordinary record as a Test captain.

It hasn’t shown up by his side on this tour so far. For a starter, it could help him by flipping the coin in his favour on Friday.(PTI)