India need to put behind the humiliation of losing the Test rubber against England and regroup quickly to take on the confident visitors in the first of the two T20 Internationals on Thursday. 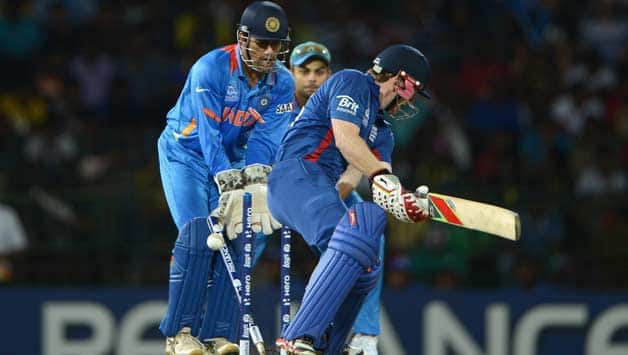 India can draw inspiration from their last tie against England, wherein they thrashed them by 90 runs © Getty Images

India need to put behind the humiliation of losing the Test rubber against England and regroup quickly to take on the confident visitors in the first of the two T20 Internationals on Thursday.

Under-fire for the first Test series loss to England in 28 years and and with his captaincy under the scanner, skipper Mahendra Singh Dhoni will have to put these issues on the back burner and motivate his teammates for the shortest format of the game.

To the home team’s advantage, a younger lot of players some of who were not part of the Test series like flamboyant all rounder Suresh Raina, Rohit Sharma and Ambati Rayudu would give India the much-needed edge and enthusiasm.

All three are very good T20 players and would also bring the extra zip and verve in the fielding department which was absent in the Tests.

They have all been busy playing in the Ranji Trophy for their respective units and will be match fit too.

Incidentally Sharma, who has been in good form with the bat in the Ranji Trophy recently, had top-scored with an unbeaten 55 when the two teams last met in a T20 game, won by India by a whopping margin of 90 runs in Sri Lanka earlier this year during the ICC T20 World Cup.

Yuvraj Singh, who flopped in the Test series barring a fighting 74 in the opener at Ahmedabad, is back to the format in which he has excelled in the past.

Dashing opener Virender Sehwag has opted out of the two-match series, which ends with the last match at Mumbai on December 22, and it has given the chance to Ajinkya Rahane, who warmed the bench right through the Test series, to open the innings with Gautam Gambhir.

Rahane had impressed with a 61 when the two teams met in a T20 game last year in England at Manchester and would be eager to get going after playing Ranji Trophy games for Mumbai.

Dhoni, himself a superb T20 and 50-over batsman, would be the late-order game changer, and with Virat Kohli, who had rediscovered his wonted touch with a patient 103 in the last Test at Nagpur, will give extra impetus in the batting and fielding sections.

The new ball bowling has a fresh look to it in the form of Ashok Dinda, Abhimanyu Mithun , Bhuvneshwar Kumar and Parwinder Awana with veteran Zaheer Khan opting out.

Dinda and Awana had been part of the Test squad in the latter stages but did not get a game while Mithun has been added as a replacement for his injured Karnataka teammate, R Vinay Kumar.

Spin bowling department will be manned by R Ashwin, who would be extra keen to impress after a disappointing show with the ball in the Test rubber, Ravindra Jadeja, who made his Test debut at Nagpur, and Piyush Chawla, who too was part of the team in the drawn final game.

England have made wholesale changes in their squad with triumphant Test skipper Alastair Cook returning home and replaced at the helm by hard-hitting middle order batsman Eoin Morgan who was part of the Test team but did not play a single game.

Morgan is also the stand-in captain for the injured Stuart Broad, replaced by James Harris, who has returned home along with many other members of the team, notably Kevin Pietersen.

The absence of Pietersen, who played a big role in England winning the Test rubber, would be welcomed by India.

The star batsman is no longer part of the England Twenty20 team.

England have included T20 specialists like Alex Hales, Jos Butler, Jade Dernbach, James Tredwell, Michael Lumb, Luke Wright and Danny Briggs some of who have been part of the development squad which played a few matches in Navi Mumbai when the Test matches were on.

Retained from the Test squad along with captain Morgan are Tim Bresnan, wicket-keeper Jonny Bairstow, Samit Patel and Joe Root, who made an impressive Test debut in the final match.

Bresnan and Patel also had the opportunity to play in two and three Tests while Morgan and Bairstow did not.

India have lost three T20 games, all in bilateral series, between the two sides. They had lost bilateral matches played at Lord’s in June 2009 and the next two held at Manchester and Kolkata in August and October last year.

The game here would be the first T20 International played at the swanky Sahara Stadium on the city’s outskirts which hosted IPL matches last year. It has a capacity of 43,000.