Australia's back-to-back losses have thrown the ODI tri-series open and a revitalised India would look to corner the struggling and injury-hit hosts when the two sides clash in the critical second phase of the league on Sunday. 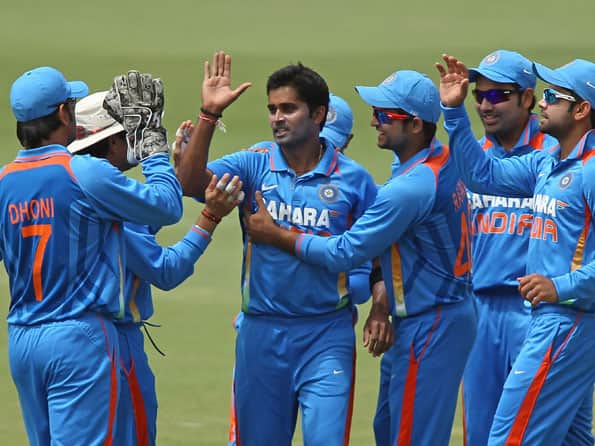 Australia’s back-to-back losses have thrown the ODI tri-series open and a revitalised India would look to corner the struggling and injury-hit hosts when the two sides clash in the critical second phase of the league on Sunday.

Pleasantly surprised to see themselves atop the table at the halfway stage, India are aware the arduous climb would only begin in earnest from now on.

Sri Lanka scrambled the stakes with a damning defeat of Australia in Sydney last night — the likes of which the hosts have rarely suffered — and might just be peaking at the right time in the tournament.

Little separates the three teams and all could change in a matter of two games. The Gabba double-header thus assumes enormous significance for Mahendra Singh Dhoni’s men.

India have shown their appreciation of the situation and the last couple of days have been hard work-outs for the boys at the venue.

The vexed issue of dropping one of the three openers has worked itself out with the likely absence of Virender Sehwag in the day-night encounter.

Sehwag is ill at ease with his back spasm and even though he stayed around in the nets and also padded up at the fag end for a few hits, the right-hander looks a non-starter.

It would give an extension to the in-form Gautam Gambhir, not to forget yet another shot at the elusive 100th century to Sachin Tendulkar, both of whom straining at the leash to stamp themselves on the Australians who have been ruinous to their reputation this summer.

Gambhir has kicked on with two brilliant near-centuries in Adelaide and has 188 runs from three matches at 62.65 average. He also has a notable strike rate of 83.55 which has made him an enviable anchor for other two teams.

The Delhi opener has allowed others to feed off his long stays at the crease.

The rotation thus would have to be centred around the bowlers but it too isn’t a straightforward decision. The bouncy pitch at Gabba demands that India go with an extra medium-fast bowler at the expense of a spinner.

So far Ravichandran Ashwin and Ravindra Jadeja have been the go-to spinners for the Indians. One of them could sit out to accommodate Irfan Pathan, impressive in his first game, as Zaheer Khan and Umesh Yadav, not to forget Praveen Kumar, have legitimate calls to be included in the eleven.

Vinay Kumar, who has played four straight matches, could sit out to allow others a game in the middle.

India, to be fair, have enhanced their one-day reputation on the present tour. A largely young side, they surely have a good grasp of one-day ethics.

The bowlers have learnt to bowl to their field; the lower half knows how to stitch runs together in the final overs. The fielding is keen and eager and India thus are an all-round package, led ably and efficiently by Dhoni.

Australia, meanwhile, are in a muddle. Their top order is just not functioning and there is too much on the plate for Hussey brothers — David and Mike — in the middle. Michael Clarke’s absence due to a hamstring pull couldn’t have come at a worse time for the hosts.

Ricky Ponting, who only now had begun to breathe easily after a sumptuous Test series, once again is causing derision with his utterly miserable one-day series so far.

The mighty right-hander has a mere 11 runs from four innings at a 2.75 average. His bat presently has all edges and no middle.

The extra bow in his quiver, the one of captaincy, too has gone limp given the thrashing by Sri Lanka the other night.

Left-handed opener David Warner is causing a revision in opinion about his talent. He is eye-catching but rarely so appealing while defending.

He has 71 runs from four innings at 17.75 and Australia are worried about the turbulence at the top.

Young Matthew Wade and Peter Forrest though promise a lot and Hussey brothers continue to be a formidable presence in the middle. Between themselves, the two Husseys have clouted 25 fours and five sixes.

Australia also are not quite pleased with their bowling.

Left-armer Mitchell Starc has four wickets from four matches at a disappointing average of 41.00. His economy rate of 5.89 isn’t pleasing either.

Brett Lee’s return to the bowling crease was a forgettable affair last night as the experienced paceman conceded 42 runs in his seven overs.

Two young bowlers, Clint McKay and Xavier Doherty, have been game performers though. McKay has nine wickets at 16.22 while Doherty has claimed six at 21.50 average.

Australia though need a cutting edge from their bowlers with the new ball. It’s as good a time as ever to return to Ben Hilfenhaus, now that Ryan Harris has been left out in the cold.

The dice is loaded against Australia and one more defeat tomorrow could throw the cat among the pigeons.(PTI)

It's time to perform or perish for the talented Suresh Raina