Preview: India to clash with New Zealand for place in U-19 World Cup final

Preview: India to clash with New Zealand for place in U-19 World Cup final

Their confidence at an all time high after the narrow win over arch-rivals Pakistan in the quarter-finals, India would look to carry on the good show against New Zealand in the semi-finals of the ICC Under-19 Cricket World Cup on Thursday. 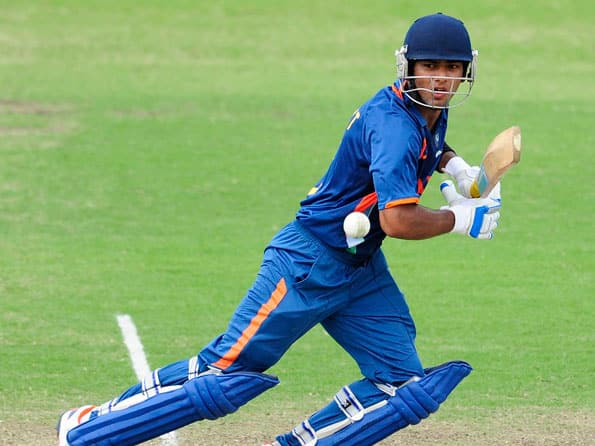 Their confidence at an all time high after the narrow win over arch-rivals Pakistan in the quarter-finals, India would look to carry on the good show against New Zealand in the semi-finals of the ICC Under-19 Cricket World Cup on Thursday.

Having started on a poor note, losing their lung opener against the West Indies, India managed bring its campaign back on track with back-to-back victories against Zimbabwe and Papua New Guinea before registering a narrow one-wicket win over Pakistan in the last eight round.

However, the batting department remains a major cause of concern for the Indian going into the crucial game. Leaving aside the match against Zimbabwe, where the top-order clicked in unison, the Indian batsmen have been inconsistent so far in the tournament.

Skipper Unmukt Chand has amassed 104 runs from his four outings in the tournament with 78 against Zimbabwe being his best, while Baba Aprajith, before his match-winning half-century against Pakistan, could manage a meagre 43 from three outings.

Opener Prashant Chopra though scored a duck in the last match, has been the most consistent batsman for India with two half-centuries against his name.

Vijay Zol and wicketkeeper-batsman Samit Patel have been pretty decent with the willow in the middle order, but they certainly would need to do better against the Kiwis tomorrow.

India, meanwhile, can boast of a reliable bowling attack, which has been consistent in the tournament so far.

The team is likely to rely heavily on the likes of Kamal Passi, Sandeep Sharma and Ravikant Singh to deliver the the goods once again.

Fielding is another strong point of the Indians and they would definitely try to keep up the good work.

“Sandeep bowled well and Ravikant and Passi were equally good. Fielding was also top notch,” skipper Chand had said after the match against Pakistan.

Like India, New Zealand also managed to snatch a win from the jaws of defeat against in-form West Indies in the quarters.

New Zealand’s Ish Sodhi hit 12 off the last three balls, with a boundary off the last delivery, to see his side home by three wickets against the West Indies.

And the onus would be on Sodhi to come up with yet another magical knock against the Indians.

The Black Caps though will be missing the services of all-rounder Henry Walsh against India after the Wellington-based player had returned home yesterday with an ankle injury. Northern District’s batsman Ben Hyde has joined the team as his replacement.

New Zealand captain Will Young, on the eve of the match, said that India would be a tough side to beat.

“The victory over the West Indies has given the team a lot of belief ahead of the semi-final and the whole group is excited by what lies in front of us,” Young said.

“India is a strong side and it will be a tough match, but at the same time we feel confident that if we play to our potential we can beat them,” he added.

VVS Laxman did not invite me for his retirement party: MS Dhoni