Virat Kohli’s clinical hundred and Ambati Rayudu’s calm fifty assured India’s safe passage to victory in the first One-Day International (ODI) against Zimbabwe at Harare. India would target another win to continue their march and keep the hosts under check. Virat Kohli’s clinical hundred and Ambati Rayudu’s calm fifty assured India’s safe passage to victory in the first One-Day International (ODI) against Zimbabwe at Harare. India would target another win to continue their march and keep the hosts under check.

The toss at Harare is crucial at this time of the year as the team bowling first can exploit the early morning bite. If put in to bat, either side would have to battle the conditions and see off the first hour.

India wouldn’t really consider making any changes as things worked for them in the first ODI. The batting order should remain the same in all probability. Rayudu did a good job with the bat and will continue to hold his spot ahead of Cheteshwar Pujara and Ajinkya Rahane. On the other hand, the openers Shikhar Dhawan and Rohit Sharma would be eyeing a good start. Suresh Raina had a blob in the first ODI and that should push him to essay a long innings if given an opportunity.

The Indian bowling has options on the bench. However, Jaydev Unadkat and Shami Ahmed would continue as a lot of chopping and changing would only lead to instability. R Vinay Kumar is the leader of this attack and Amit Mishra holds the key in the middle overs. He combined well with Jadeja in the first game to keep the pressure on Zimbabwe in the middle.

Zimbabwe have found a new batsman in Sikandar Raza and they would keep him at the top. However, if there is one thing, they would want to get on with things a little quicker as leaving things too late doesn’t help their cause. Perhaps, captain Brendan Taylor can consider a promotion for himself as he is their best batsman and can come upfront and take charge. In the last game, he batted lower down the order and couldn’t do much. Elton Chigumbura was good and he seems to be the finisher.

Depending on the start, they can decide on their spots in the line-up. If the openers do set the platform and they have wickets in hand going into the slog overs, a promotion for the duo would make a lot of sense.

The Zimbabwe bowlers would hope the toss goes their way as then they could put the Indian batsmen under pressure early on. But, one cannot leave things to chance and their bowlers have to do a better job than they did in the first game. Proper Utseya is the key as he kept the Indians quiet in the middle overs. The Indians are good players of spin and yet the offie could maintain his hold over proceedings is truly commendable.

Zimbabwe have their work cut out for this game. Kohli’s India have to maintain the intensity as the lessons from their last tour are still fresh in memory. 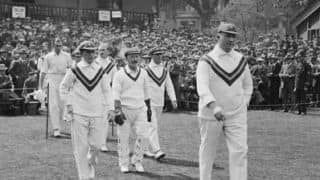