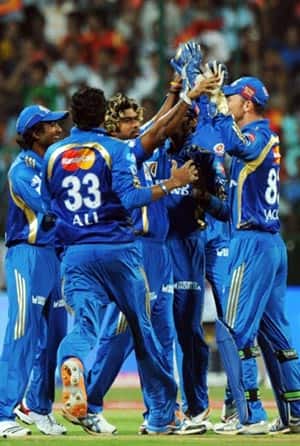 It was the first edition of the Indian Premier League. Yuvraj Singh was the captain of the Kings XI Punjab and he had won a close game against the Mumbai Indians at Wankhede stadium. In a mood that was nothing short of belligerent, Yuvraj had then exhorted the Mumbai crowd to be less abusive; “I want to tell the crowd that the crowd support was too one sided towards Mumbai. Let me remind them that some of the Punjab players also play for India.”

Only a few days earlier, it was Yuvraj who was one of those cheered by the Wankhede crowd as he finished the Sri Lankans off in the final of the World Cup. Yuvraj, has thus seen, the two ends of the spectrum when it comes to crowd-behaviour on this ground.

The question now is whether there will be restraint of any kind from those in the stands at the Wankhede when Mumbai Indians host the Yuvraj-led Pune Warriors in the 21st game of the IPL this season.

Mumbai Indians looked to be on their way to their third successive win in the competition when they set the Tuskers a target of 183 for a win. Poor fielding and dewy conditions made life difficult for the Mumbai bowlers and the side failed to defend the total.

Pune s story was no different. They were up against the bottom-placed Delhi Daredevils and had set them a 180-plus target as well. Again, the Daredevils ran through to a win despite a four-wicket haul from Yuvraj.

If one were to look at the way the two sides have bowled, the Pune pacers prefer the night games, where they have been able to extract the bounce and swing from the pitch. Mumbai Indians will prefer the drier ball give their styles Lasith Malinga likes to bowl the yorkers while Munaf Patel is a back of a good length bowler. Pune s Alfonso Thomas, Shrikant Wagh and even Wayne Parnell like to swing around, under the lights and a bit of the moisture on the pitch.

This is why, the Mumbai Indians will be the happier of the two sides with the game being a 4.00 pm start.

The batting continues to be the point of strength for the two teams. That said, the game could answer a couple of interesting questions will the likes of Andrew Symonds and Kieron Pollard finally be able to unleash their power and secondly, will the Pune think-tank replace the out-of-form Graeme Smith at the top of the innings with someone like a Callum Ferguson, Manish Pandey or Tim Paine.