Pakistan will face top-ranked South Africa in the first Test at the Wanderers from Friday destabilised by the loss of rock-solid opener Taufeeq Umar. 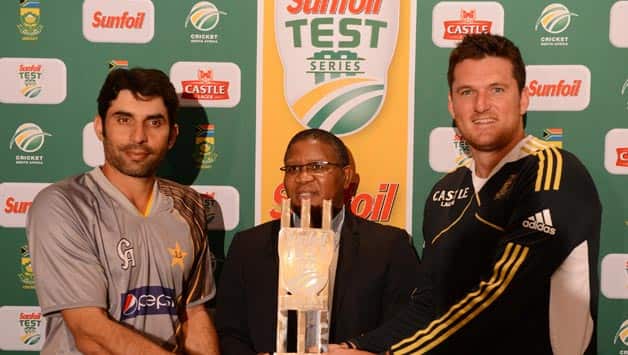 Pakistan will face top-ranked South Africa in the first Test at the Wanderers from Friday destabilised by the loss of rock-solid opener Taufeeq Umar.

The 31-year-old Umar, who has played 43 Tests and scored 2,943 runs, was pulled out of the tour after suffering a muscle injury in his shin.

Umar and regular partner Mohammad Hafeez had opened together in 18 consecutive Tests, a record for Pakistan, and the tourists were keen for the sequence to continue against South Africa’s formidable fast bowling attack on a pitch likely to offer pace and bounce.

With Umar out, Nasir Jamshed is expected to make his Test debut after scoring half-centuries in the warm-up game against a South African Invitation XI which ended in a draw at East London on Monday.

Pakistan’s batting could be the key to the three-match series after South Africa’s bowlers swept aside the challenge of New Zealand in two Test matches earlier this month.

Off-spinner Saeed Ajmal, at number three, is the only Pakistan bowler in the top 10.

The middle order failed against the Invitation XI, with only captain Misbah-ul-Haq joining the openers in notching a half-century.

But if Pakistan can post respectable totals, they will be confident they have the bowling weaponry to test a strong South African batting line-up.

While Ajmal will be able to bowl long spells of spin, the experienced Umar Gul and the left-arm swing bowler Junaid Khan, together with the unknown factor of the 2.1 metre Mohammad Irfan, will provide a varied pace attack.

The teams last met in two high-scoring drawn matches in the United Arab Emirates in 2010.

Since then Pakistan have won nine of their 16 Test matches and lost only two — against the West Indies in Guyana in May 2011 and against Sri Lanka in Galle in June 2012.

South Africa, meanwhile, have built a formidable record as they have climbed to the number one place in the rankings, winning their most recent five series, including away encounters against England and Australia.

Philander and batsman Hashim Amla were both passed fit after missing recent matches but left-arm spinner Robin Peterson remained a doubtful starter after splitting the webbing between fingers on his right hand.

South Africa captain Graeme Smith will become the first man to lead in 100 Test matches, an event which has dominated the build-up to the match.