One the one hand is a side which has turned things around for itself after having being panned for picking up some unknown faces, both in and outside the auction. 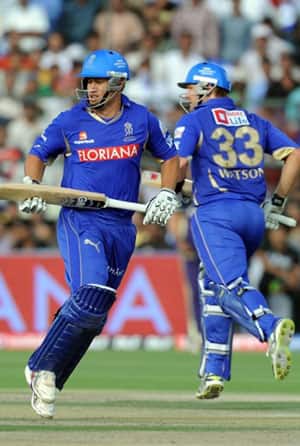 One the one hand is a side which has turned things around for itself after having being panned for picking up some unknown faces, both in and outside the auction. At the other end of the spectrum is a side which looked to have begun in the way they had when they had won the IPL before dishing out some surprising decisions and going down in two successive games.

Kings XI Punjab will host the Rajasthan Royals in the 23rd game of the Indian Premier League this season and it will be a case of rivalry between two Australians who weren t the best of mates during their national playing days.

Punjab s Adam Gilchrist will hope for a continuing of the winning streak which has left many surprised while Shane Warne will need to find back his Rajasthan their winning mojo.

Punjab s turnaround can be attributed to Paul Valthaty. The man is at the joint-top position in the run-scoring charts to go with his four-wicket haul in the Deccan game. Gilchrist found his touch as well with his quick-scoring half-century while Ryan Harris and Praveen Kumar have carried the bowling attack well.

Where Punjab lacks is in the back-up bowling and that all-rounder s slot, currently occupied by Piyush Chawla and Abhishek Nayar. Both were high-profile, but surprising buys at the auction and it would be fair to say that they have yet to fulfil the potential that the team would have seen while getting them onboard.

Rajasthan s sudden u-turn in fortunes isn t very surprising. It is an oft-repeated line that when tactical decisions go in the captain s favour, they are wowed by the fans but when they don t, questions get asked of him. Warne has made two tactical errors, at least in the hindsight, in not allowing Shane Watson to bat at the top of the order in the first Kolkata game and then pushing Ross Taylor to the number six position in the second one.

Not that the losses can be solely blamed on this. There were injury troubles too. Both, Johan Botha and Rahul Dravid missed out the Rajasthan game but the rained-off match in Bangalore would have allowed them to get back to their full fitness as well.

Warne will change things around, that is his wont, but what will be interesting to see is if he retains Shaun Tait. It is a night game and at Mohali, there is always that chance of dew playing a part towards the end of the match, making the spinners redundant. Tait could be handy even if Botha is fit to make a comeback.

This is also the third away game in a row for the Royals before they have a week at home. There will be issues around fatigue but as professional cricketers, one would hope that they will not let that affect the on-field performance.