Sri Lanka are in a strange position. They know they have to win this game and win it big. And even if they can do that, the experts and the other teams would be following the game closely to hunt for any chinks in their armour. 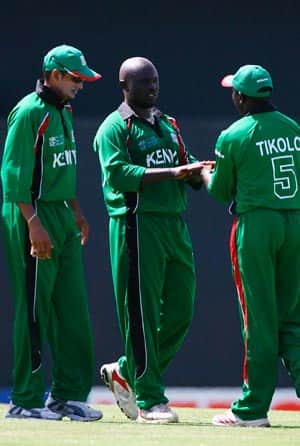 Two of the three pre-tournament favourites have had a game each that they would want to forget in a hurry. India squandered away a score of 338 to come out with only a point from their tied encounter against England. And even before that Sri Lanka went down fighting to Pakistan, despite having gone into the game as favourites.

What is a tad surprising is the reaction to the Sri Lankan defeat. Usually not known to react in the manner best reserved for the other sub-continent fans, there was a mini-outrage in the Island Nation.

As reports of fans panning the side at the end of the game filtered through, it would have accorded the Lankan side a wake-up call. The alarm-bells would have rung. Sri Lanka would do well to shut them by thumping Kenya at the R Premadasa on March 1.

Sri Lanka are in a strange position. They know they have to win this game and win it big. And even if they can do that, the experts and the other teams would be following the game closely to hunt for any chinks in their armour.

While it may not get exposed against Kenya, Sri Lanka s middle-order batting has remained an issue for long. Chamara Silva did get to a half-century against Pakistan but in the context of the game, it was slow. In the end, it cost the side the game.

Again, if Angelo Mathews can send down six to seven overs in all the games, then some of the woes can be absorbed by allowing a player like Silva to get into his groove as the tournament goes on. He managed to get all his ten in against Pakistan and could be afforded another ten. Similarly, Thilan Samaraweera will look to get a longer go at the crease, probably by batting at the three or four in the line-up.

It would be a fair comment to make if one said that Kenya are one of the least likely to win a game amongst the Associates. One could have put one loss as an anomaly. But when a team loses a game by ten wickets with 42 overs to spare and follows it up with a 205-run thrashing in the second, then there isn t too much positive to talk about them.

The one inspiration that Kenya can look to take from is their win against Sri Lanka in the 2003 World Cup. That was a fairly competitive side under the tutelage of Sandeep Patil.

While they were fortunate to get to the semi-finals, one cannot take away from them, their wins against Sri Lanka, Bangladesh, Canada and a rather strong Zimbabwean side in that tournament. Eight years on, however, their captain from that tournament has become their main, but out-of-form batsman, their best spinner from then, plays as a pure batsman and the best pace-bowler is not only on the wrong side of 30 but also sends down wides like it is his avocation.

Steve Tikolo, Collins Obuya and Thomas Odoyo will need to conjure up something special here for Kenya.

What has made the scenario worse for Kenya is that there are rumblings of in-fighting between the coach and some of the players, accentuated probably by the indications by the Kenya Cricket chief. It would be expecting the moon for Kenya to notch their first points in this game but from their fans perspective, a much-improved performance is what they would hope for. Pray for.