Preview: Zimbabwe start as favourites against Canada in minnows clash

Preview: Zimbabwe start as favourites against Canada in minnows clash

On paper, the 12th match of the 2011 World Cup is little more than a tussle for bragging rights between two of the tournament s minnows. 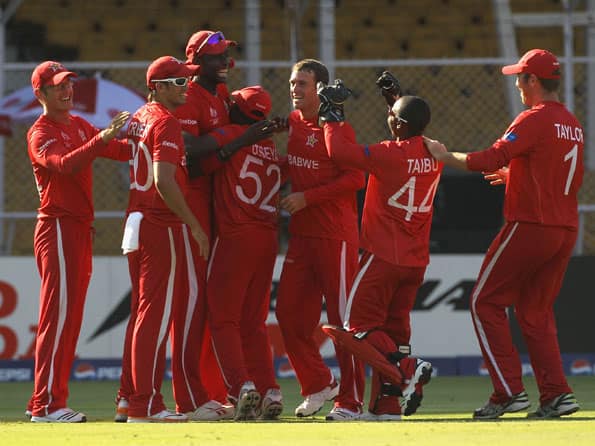 On paper, the 12th match of the 2011 World Cup is little more than a tussle for bragging rights between two of the tournament s minnows.

On paper, the 12th match of the 2011 World Cup is little more than a tussle for bragging rights between two of the tournament s minnows. Zimbabwe may take umbrage at being referred to as minnows, but they stand little chance of beating any top teams and their crumbling defeat against Australia only highlights their fragility with the bat. Neither Zimbabwe nor Canada are expected to progress to the quarter-finals, given the presence of Australia, Sri Lanka, Pakistan and New Zealand in Group A.

It s been a discomfiting eight days for the small teams, who have been handed big defeats drawing much criticism from pundits and the media. But, for the first time tomorrow, two weak teams get a chance to show off their strengths. The Nagpur pitch showed little sign of turn in the two matches played so far, but Zimbabwe s coach Alan Butcher was sure his team would focus on spin again. “Our spin department is our strength,” he said. “Why would we go away from that?”

The form and past history favours Zimbabwe, who won the sole match they played against Canada, back in 2006. Their players have more international experience and a functional first-class structure that has been refurbished by the Zimbabwean board via the hiring of overseas professionals and coaches. Keeping in mind the tougher games ahead, it is imperative that Elton Chigumbura, Tatenda Taibu, Brendan Taylor, Charles Coventry, Prosper Utseya and Ray Price find success tomorrow. These are the players who form the bulk of Zimbabwe s experience, and they need to be leading examples to the likes of Sean Williams, Craig Ervine, Graeme Cremer and Chris Mpofu.

Don t expect Zimbabwe to make wholesale changes. They rely too much on the players that comprised the XI that played Australia, but there s a possibility Terry Duffin or Greg Lamb get a game instead of Ervine who fell for a duck in the loss. Duffin is a batsman, Lamb an all-rounder.

Like Zimbabwe, Canada lean heavily on experienced players with a few promising youngsters thrown into the mix. John Davison, Ashish Bagai and Henry Osinde are the only survivors in the Canada side from their only match against Zimbabwe during the ICC Tri-series tournament at Port of Spain in 2006 which they lost by 143 runs, and remain central figures. Canada lost the services of Osinde in the field when he pulled up with a muscle tear, but he should have had time to recover since the last match. If not, Canada would have to bring in one of the three remaining batsmen in the squad. Talk of Canada s prospects is incomplete without mention of Davison, the veteran opening batsman. He lasted one ball against Sri Lanka, but with this likely to be Canada s final World Cup – the number of teams for the 2015 World Cup is being reduced to 10 its time Davison picked a stage to remind everyone of what he can do.

India to bat first against England