Prithvi crossed 50 for the first time over the last weekend in the league.

Young Mumbai cricketer Prithvi Shaw, who has been touted as one of India’s most impressive young talents, has impressed with the bat in trying conditions this year in the Yorkshire league where he’s representing Cleethorpes CC.

Shaw, who is managed by Sunil Gavaskar‘s Professional Management Group, crossed 50 for the first time over the last weekend in difficult conditions even while wickets fell at the other end during a run chase of 205, said a release from PMG.

Shaw’s contributions included a valuable 42 not out in his first home game against Scarborough CC. He has also starred with the ball against Harrogate CC, another Yorkshire club of great tradition, by taking 5 wickets while defending 268 on a good batting track, besides scoring a quick-fire 20. He has also had success playing for the Lincolnshire minor counties 2nd XI and U-25 teams and is due to play against the Cheshire minor counties side this week too.

Shaw’s stint in the UK is through an international sporting exchange scheme, founded by former England Universities wicket-keeper batsman and surgeon, Dr Samir Pathak, who has been bringing young, talented Indian cricketers to the UK for the past 3 years, the release said. The scheme subsequently evolved into a charity termed “IOHSA” through which Pathak and the charity are to provide the financial and educational platform to successfully promote young aspiring cricketers.

The aim is to enhance their social and cricketing development, the release added. The charity was formally launched at the House of Lords on July 4 in the presence of former Test stars Sachin Tendulkar, Dilip Vengsarkar, Farokh Engineer and the Indian High Commissioner to the UK, Ranjan Mathai, and Lord Bhikhu Parekh. This year Prithvi would be working alongside Tumi Masekela, a professional from the Knights in Bloemfontein in South Africa, and former minor counties cricketer and skipper of Cleethorpes CC, Bill Kirby.

Shaw returned to the UK under the umbrella of the scheme after visiting UK in 2012 under the mentorship of Dr Pathak and attended Cheadle Hulme School in Manchester. Shaw smashed a staggering 546 not out in the local Harris Shield inter-schools tournament recently — the third highest ever score in cricket’s history. 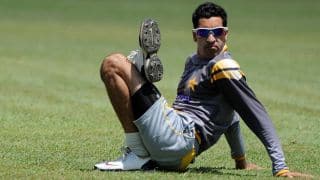