Was Priyank Panchal upset about not crossing that milestone? The answer is no.

In all the 8 games leading to the Ranji Trophy 2016-17 final, Gujarat opener Priyank Panchal managed to score 60 or above at least once every match. His dream run saw him pummel 5 hundreds (including a double- and a triple-ton) and 4 fifties. Before the final, he sat comfortably at the top of the batting charts with 1,270 runs from 9 games, just 146 runs away from VVS Laxman s all time record of 1,415 runs in a Ranji Trophy season. Looking at his performance in the build-up to the final, the idea of backing him to get those runs and chase glory was not preposterous. He had, after all, been scoring runs in abundance. However, he failed to go past Laxman.

Panchal managed just 6 and 34 against Mumbai in the final at Indore, thus ending up 106 runs short of the record. In fact, he even missed the chance to become the second-highest spot too, falling 11 short of Shreyas Iyer s tally. Iyer, one of his opponents in the final, had hammered 1,321 runs in the previous edition. Was Panchal upset about not crossing that milestone? The answer is no. To him, raising the standard is more important … I don t chase records. To me, raising the standard is more important than breaking the records. If I do well, records will follow, he told CricketCountry.

The record was insignificant for Panchal. For that matter, becoming the highest run-getter in the recently concluded Ranji Trophy season was not of any importance till Gujarat did not win the title. All he cared about was winning the Ranji Trophy for Gujarat. My aim, and the entire team s aim, was to win the Ranji Trophy. What makes it special for me is the fact that I could contribute big time. Being the highest run-getter this season would have been of no use if we did not win the title. So, the feeling that I could play a role in the win is extremely satisfying.

Panchal was all praise for the Gujarat team as well as skipper Parthiv Patel, who played a huge role in the win. Parthiv-bhai has been a big influence on the side. In the Ranji final too he led from the front, scoring vital runs in both the innings and setting up the win, he said. Gujarat coach Vijay Patel too had praised Parthiv during the Ranji final in Indore. He had in fact threw light on an important point, that Parthiv had scored big runs, mostly hundreds, in crunch matches in recent times. In the major tournaments across formats in last one year T20 final, one-day final, Deodhar Trophy Gujarat had been benefitted by outstanding performances from Parthiv. The skipper kept the date with finals with his 143 in the second innings.

Getting benefited with Parthiv s form, no wonder Gujarat had done well in domestic cricket in recent times. They won the Syed Mushtaq Ali Trophy in 2014-15 and the Vijay Hazare Trophy in 2015-16, but Ranji Trophy remained elusive. We had been doing well in the shorter formats in last couple of seasons, but were failing to make it to the knockouts in Ranji Trophy. So, this year, the entire unit made a concentrated effort to make it to the knockouts first and then take it from there, said Panchal.

Coming back to his record shattering season, Panchal ended up as the highest run-getter with a comfortable distance. He scored 5 centuries and 4 fifties en route 1,310 runs. It was his ninth First-Class season for Gujarat and obviously the watershed one too. It was only logical to ask him about the changes he made this year.

Panchal s reply came in his usual calm demeanour: he simply focused on playing big knocks: I scored 600-odd runs last year too (665 in 8 games to be precise, being the leading run-scorer for Gujarat last year as well.) But the big knocks were not coming. This year, my focus was on batting for long periods. If an opener gets big scores, it helps the team in return to score big and win matches, Panchal said.

Luckily for him, his approach paid big dividends, as he notched up two big hundreds 232 against Mumbai and 314* against Punjab. Not just for him, but the approach worked for his opening partner Samit Gohil and for Gujarat in general as well. Gohil accumulated 914 runs this season as well, finishing sixth on the list. Their chemistry at the top was one of the biggest reasons behind Gujarat s success.

The Irani Cup 2016-17 begins on Friday in Mumbai and will be played between Gujarat and Rest of India (RoI). On the eve of the clash Gujarat skipper Parthiv told media that the Ranji Trophy win, though only less than a week old, is a thing of past now and his team is looking at the future: It is something that we all have agreed to; once the Ranji Trophy is finished, it is done. We had a goal of winning the Ranji Trophy before the season started we have achieved it, now we go to the next level and improve as a team and as individuals. It is something that every player in this team understands. They don t want to get satisfied (by winning Ranji Trophy alone), Parthiv told BCCI.tv.

Panchal echoes a similar sentiment. Right now he has his eyes now set on the future. The Ranji Trophy win is behind us now. The 1,310 runs that I scored this season is a thing of the past and I am now looking forward to the Irani Cup and other future tournaments. 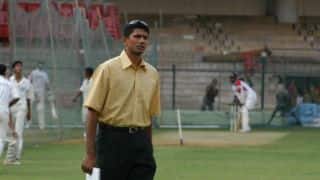