When these two teams meet each other in front of the home crowd in the bustling Gaddafi Stadium on Sunday, Peshawar will have that slight advantage with their skipper Darren Sammy and other overseas players turning out for them.

The second season of Pakistan Super League (PSL) has finally reached its climax, with Peshawar Zalmi and Quetta Gladiators setting up a date for the summit clash. What makes this final special is the fact that it is going to be played at Gaddafi Stadium in Lahore amidst heavy security arrangements. The Pakistani Premier, the chief of army and other important personalities of the country are also expected to make it to the ground apart from at least 20,000 odd fans, thus making it a gala affair. The security concerns have always been there, but for this historic clash, the arrangements usually reserved for the heads of state have been made. ALSO READ: Lahore turns into fortress ahead of PSL 2017 final

Despite extensive and elaborate security arrangements, the overseas players of Quetta franchise have already backed out from this game, citing security fears. This has taken some sheen off the final. Also, though the Peshawar owner Javed Afridi has confirmed all five of his overseas players will travel to Lahore for the final, a cloud of uncertainty still remains.

But nothing is going to impact the game, as they say, the show must go on. Both these sides have done enough to make it to the Lahore final. While Peshawar Zalmi finished the league stage as the table toppers, Quetta Gladiators were not far behind, finishing only a fraction of points behind them on the points table. Even in the three games these two sides met during this edition of the tournament, the honours were shared with both sides winning a game each and one bearing no result. The important match, however, was won by Quetta, who beat Peshawar by an agonising margin of 1 run to directly qualify for the final in the first qualifier.

Peshawar, who luckily had the luxury of two attempts to make it to the final, did not squander the chance and beat Karachi Kings in a clinical fashion by 24 runs to set up the final date with Sarfraz Ahmed and co. ALSO READ: PSL 2017: Five-layer security for final in Lahore

When these two teams meet each other in front of the home crowd in the bustling Gaddafi Stadium on Sunday, Peshawar will have that slight advantage with their skipper Darren Sammy and other overseas players turning out for them. Quetta will miss the services of Kevin Pietersen, Rilee Rossouw and Tymal Mills the most. All three have been impactful for them, and it will be hard to find their replacements for the most important game. However, in Ahmed Shehzad, skipper Sarfraz, Asad Shafiq, Mohammad Nawaz and Zulfiqar Babar, they have players who can change the course of the match.

The overseas players Anamul Haque, Sean Ervine, Morne Van Wyk, Elton Chigumbura and Rayad Emrit, who are willing to travel to Pakistan, may find themselves in the mix for Quetta and fill in the void. This should offer some solace to the Gladiators. Also, with Sir Viv Richards, team s mentor, travelling to Lahore, the Quetta franchise should stay in good stead.

Peshawar, on the other hand, will miss the mercurial Shahid Afridi, who has been ruled out due to an injury. But the side still has enough gas in their tank to topple Quetta. In-form Kamran Akmal, who slammed a classy hundred against Karachi Kings on Friday, is expected to lead the charge in final too. He has Dawid Malan, Marlon Samuels and Mohammad Hafeez to give him company. In Chris Jordan, Wahab Riaz and Hasan Ali, they have a potent attack to dismantle the opponents.

The final, being played under the shadow of policemen carrying AK-47s, snipers being stationed in and around the stadium, extensive security arrangements in place and the terror threat looming large, is unlikely to change any perception regarding Pakistan being a safe venue for international cricket. It will, however, will bring joy to faces of thousands present in the ground and a million others in the terror-torn country, who will finally get a piece of what is truly their own. 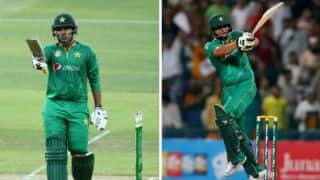