Quetta Gladiators too would be feeling lucky to have retained the hard-hitting Twenty20 (T20) batsman in the form of Kevin Pietersen from England.

England‘s discarded batsman Kevin Pietersen on Wednesday was roped by Quetta Gladiators, during the player draft ceremony of the 2017 Pakistan Super League (PSL). Pietersen, who played for the same side in the inaugural edition of the tournament in 2016, will be lucky to find himself in the same side, as he more or less has an idea on how the team works and the players fair. However, it would be his performance that would matter the most, and would be interesting to see if he manages to steer Quetta to a title win in 2017. Quetta too would be feeling lucky to have retained the hard-hitting Twenty20 (T20) batsman from England. PSL 2017: Pakistan to stage fly-in, fly-out final in Lahore

Meanwhile, Pakistan will stage the 2017 final of their Twenty20 franchise league in Lahore but teams will fly in and fly out for the showpiece event in a sobering nod to the delicate security situation in the country. Some 414 players were placed in the draft for the Pakistan Super League (PSL) on Wednesday, a list which included former New Zealand captain Brendon McCullum, West Indian stars Chris Gayle and Dwayne Bravo, Australia s Shane Watson, Bangladesh s Shakib Al Hasan and England s Twenty20 captain Eoin Morgan. Former England batsman Kevin Pietersen will also take part, while the inclusion of Morgan is particularly noteworthy after he withdrew from England s ongoing tour of Bangladesh over security concerns, reported AFP. Miandad could be named mentor of Peshawar Zalmi

Five teams took part in the inaugural edition of the PSL which was held entirely in Dubai and Sharjah in February 2016. PSL chairman Najam Sethi announced Wednesday that the 2017 final will be held in Lahore, the bustling city where the Sri Lankan team bus was attacked by militants in 2009, added AFP. 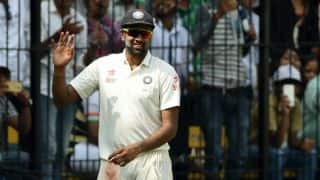 Muttiah Muralitharan: Ravichandran Ashwin has learned art of remaining patient in order to get wickets