Karachi: The country’s Federal Investigation Agency (FIA) has issued notices to four Pakistani players – Nasir Jamshed, Khalid Latif, Sharjeel Khan and Mohammad Irfan – to appear for questioning in the PSL spot-fixing case on March 20 and 21 before a special team of the agency. “The FIA has issued notices to the players in the Pakistan Super League spot-fixing case after holding preliminary investigations into the matter and after consulting the Pakistan Cricket Board,” a reliable source in the FIA told PTI. He said that the special investigation team of the FIA would question the four players. Three of them – Sharjeel, Khalid and Irfan – have been suspended from all cricket by the PCB under the anti-corruption code. PSL 2017 spot-fixing: PCB to interrogate Nasir Jamshed

The PCB has already formed a three-member tribunal headed by a former judge to conduct a probe after the board charged Sharjeel and Khalid with spot-fixing. Pakistan’s interior minister Chaudhary Nisar Ali Khan told the media in Islamabad today that the government was taking the PSL spot-fixing case seriously. He made it clear that if any player is found guilty of spot-fixing, he could end up behind bars. Meanwhile, the Pakistan Cricket Board (PCB) will interrogate Test batsman Nasir Jamshed for his role in PSL spot-fixing scandal that led to suspension of three players.

According to a well-informed official in the board, Jamshed will be questioned in at the Pakistan High Commission in London, where he is based these days. He can t come to Pakistan as he is on bail and has to appear before UK s national crime agency in April in this case. But we want to also question him in detail about his role in the PSL spot-fixing scandal, the source told PTI. 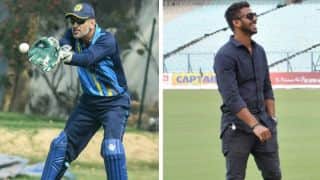