Imad had picked a mild concussion during the match against Lahore Qalandars.

Eoin Morgan is set to take over the duties of captaincy from Imad Wasim for Karachi Kings for the upcoming games of PSL 2018. Imad had picked a mild concussion during the match against Lahore Qalandars. While taking a brilliant catch of Sohail Khan running backward, he fell and hit the his head on the ground. It took him some time to recover from the injury and was stretched back by medical staff.

Although he was declared stable, Imad was under observation for 24 hours and was released from the hospital on Tuesday. On Wednesday, however, Karachi Kings announced on their Twitter account the new captain for the upcoming matches.

Morgan joined his new PSL franchise after the conclusion of England s limited-overs series. Morgan was drafted into Karachi from Peshawar Zalmi, who he represented during last year s edition of the PSL.

Karachi Kings will play under Morgan on Thursday against Peshawar Zalmi. 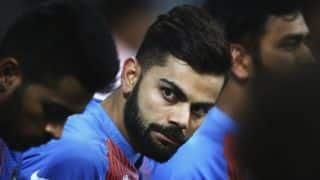