If Gladiators need to seal their berth in the playoffs, Islamabad United would have to defeat Karachi Kings on Friday.

In a must-win encounter, the Peshawar Zalmi hammered Karachi Kings for 44 runs in Match 27 of PSL 2018. With this they keep their hopes to enter the playoffs alive, as will play their final game against Lahore Qalandars on Friday.

Kamran Akmal fought against the odds after the opener Mohammad Hafeez was dismissed for third-ball duck. The introduction of Shahid Afridi caused further trouble for Peshawar as he dismissed Dwayne Smith. Ravi Bopara, too, scalped apiece of Riki Wessels. On the other hand, Akmal got his fifty. However, the final few over proved costly for the Kings. Afridi s last over saw 21 runs coming, his costliest ever in PSL history.

The Kings openers flopped. Colin Ingram was cleaned by Wahab Riaz while Joe Denly was gone for zero. Babar Azam played a lone battle until Afridi added some spark smashing four sixes. However, he fell to Liam Dawson while attempting to hit his fifth six.

Karachi who were second on the table moved down to 4th while Peshawar stay in 5th place.

Man of the Match: Kamran Akmal

In the other match, Islamabad United secured an easy win over Quetta Gladiators by 6 wickets. United have already proceeded to the playoffs and are at the top of the table. However, Gladiators’ second spot is in danger. All that Gladiators would hope is Karachi Kings defeat against the United on Friday.

Chasing target of 148, JP Duminy s half-century saw the United home with 10 balls to spare. Duminy also shared crucial partnerships on the way to his fifty – a 45-run stand with Alex Hales (16), 27 with Shadab Khan (18), and 44 quick runs towards the end with Hussain Talat (28*).

Earlier, the United bowled in disciplined fashion. Samit Patel once again struck early to scalp Shane Watson. Jason Roy, too, was sent back to the hut within the Powerplay. Gladiators managed just 36 runs then. The United received bonus with the wicket of Kevin Pietersen as well. Skipper Sarfraz Ahmed had task on hand with his team tottering at 41 for 3. He stepped up and played a composed knock of 30-ball 43.

Umar Amin played the second fiddle in a stand that fetched Gladiators 64 for the second wicket. However, his wicket triggered the collapse for Gladiators as they lost three wickets succession. Rilee Roussouw then added a vital 26-run unbeaten stand with Hasan Khan to set up a competitive total on board. Faheem Ashraf was on top for the United ending with figures of 3 for 19. 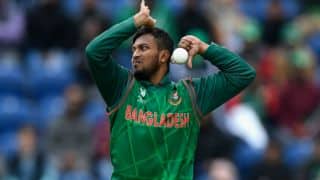