Quetta Gladiators were put to bat by the Peshawar Zalmi in the 10th match of the Pakistan Super League 2018.

Quetta Gladiators were put to bat by the Peshawar Zalmi in the 10th match of the Pakistan Super League 2018. Pehsawar used seven bowlers and managed to keep the score down to 141 in 20 overs. They then needed 17 off 10 balls as they chased the total down in the last over with 2 balls remaining.

Sameen Gul got an early breakthrough for Zalmi taking the wicket of Asad Shafiq in the third over of the match. It was the 50-run partnership between Shane Watson and Umar Amin that kept the scorecard ticking. Watson played some handsome looking strokes for his 47 runs which included five huge sixes. Watson was done for pace and drift by Usman Asif as the ball went pass him hitting the stumps.

Rilee Rossouw, who was playing his debut match in PSL contributed 37 runs to the total after being dropped on 25. Darren Sammy had to be taken off the field due to an injured front foot. He was bowling his third over which was later completed by his teammate Dwayne Smith.

Peshawar had a decent start in the second innings with Tamim Iqbal and Kamran Akmal. It was Watson again doing it with the ball this time who got rid of Kamran Akmal for 10. Tamim Iqbal continued his hitting from one end but struggled to score quick runs as he ran himself out scoring 36 off 38.

Smith’s quick 23 runs brought the required run rate down but he failed to carry the momentum as Mohammad Nawaz got through his defence bowling him out. Mohammad Hafeez scored 29 in 34 balls increasing the run rate again.

Injured Sammy who took two wickets bowling came out to bat in the second last over and soon dispatched the last ball of the over for six. Khalid Usman was smart enough to take single giving Sammy the strike in the last over. It was just a matter of two balls then, until Sammy took Peshawar home with a five wicket victory with two balls remaining.

Peshawar registered their second win in the tournament and climbed up to the fourth spot in the points table. Sammy was awarded Man of the Match for his all round performance. 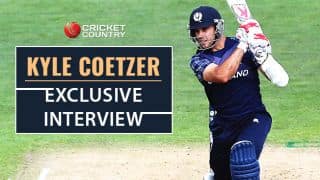 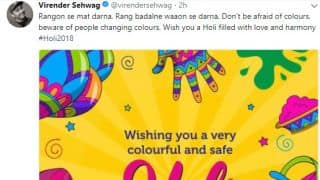 Virender Sehwag, VVS Laxman and others wish their fans on the occasion of Holi