Lahore Qalandars finally managed to notch up their first win of the Pakistan Super League (PSL) edition 3. They broke their 8-match win-less streak against Multan Sultans. Under-19 star, Shaheen Afridi starred with a 5-for. Qalandars batted quite cautiously to win the match by 6 wickets.

Qalandars chasing 115, came out with aggression. Fakhar Zaman and Anton Devcich added 33 runs in merely 2.3 overs. Both fell within a span of an over. Soon Gulraiz Sadaf and under-pressure Brendon McCullum found themselves in the middle. Sadaf scored cautiously, while McCullum looked unlike his brutal self.

Sadaf managed 27 off 40 before falling to Saif Badar. Badar had earlier dropped McCullum twice. McCullum remained unbeaten on 35 as Qalandars won by 6 wickets.

Multan Sultans batting suffered a horrible collapse. From a position of strength, they lost 9 wickets for 22 runs. Afridi doing most of the damage; picking 5 wickets for 4 runs. It was only Kumar Sangakkara and Ahmed Shehzad, who put up some fight. Sangakkarra scored 45, while Shehzad made 32.

They eventually were bowled out for 114. This was Sultans’ second loss in as many days. 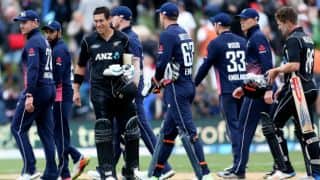 New Zealand vs England 5th ODI 2018 Live Streaming, Live Coverage on TV: When and Where to Watch