Manzoor spoke about the experience of playing alongside Shahid Afridi, being selected to play for Karachi Kings, his thoughts on team Coach Mickey Arthur.

Islamabad: Pakistan cricketer Khurram Manzoor was all praise for cricketer Shahid Afridi, calling him ‘an inspiration’ for the team. In his latest blog for PakPassion.net, Manzoor spoke about the experience of playing alongside Shahid Afridi, being selected to play for Karachi Kings, his thoughts on team Coach Mickey Arthur and how a successful performance in PSL 3 could improve his chances of playing in the 2019 World Cup.

“There is no doubt in my mind that Shahid Afridi is an inspiration for all of us. Everyone who observes him has something to learn from him. He puts in more energy than most youngsters and his presence, intensity and passion on the field is something which others can learn a lot from. He is a very good team man and whenever there is a tough situation for the team, he steps in and always chips in with valuable advice to the captain and players alike. In my view, the mark of a truly great player is in the manner in which he can pass on valuable knowledge to others around him, which is something Shahid Bhai does very often. Salman Iqbal, owner of Karachi Kings, recently said that he always wanted Shahid Afridi to play for Karachi Kings and I am sure that the people of Karachi also want him to play for their city and win them the trophy. We are proud to have Shahid Afridi in our team and he has been an inspiration for us on the field and I hope he continues to do well for us till the end of the tournament,” said Manzoor on the former Pakistani skipper.

Manzoor also lauded the efforts made by Karachi Kings skipper Imad Wasim’s coach Mickey Arthur:“I’m never make big claims before playing any tournament as I know that success is in the hands of the Almighty, but we are all very confident of doing well in this year’s Pakistan Super League (PSL). Last year, Karachi made some mistakes that we are looking to rectify, and each individual player is looking to avoid making those mistakes. I am also pleased in the way our management is supporting us and the way the team is gelling together. What is also impressive is Imad Wasim’s captaincy and the influence of our coach Mickey Arthur, and the presence and contribution of seniors like Shahid Afridi and Ravi Bopara as well as Colin Ingram which altogether explains the success that we have achieved so far,” he said.

Manzoor also said that he feels honoured and proud to be a part of the Karachi team:“I wasn’t really surprised because in the past five years, I’ve often managed to be amongst the top three run scorers or close to it in T20 tournaments. Karachi Region for which I play, have played in several finals, although we have one just one title. I’ve been a part of the playing team for all those tournaments which is a testament to my consistent performances. I’ve been such an integral part of their setup that I haven’t been dropped till now. I am now taking part in our nation’s premier cricket tournament, and it stands to reason that because I’ve been amongst the top performers in domestic cricket, one of the franchises has picked me up. So, there is nothing surprising about my selection for Karachi Kings because if you are amongst the top 300 players of your country, then you will surely be included in the draft and more than likely make it to one of the teams in the PSL. I am of course honoured and proud that it is Karachi, the city of my birth, which has selected me for their team,” he added.

Manzoor also wants to make it to the 2019 World Cup team for Pakistan and believes that the PSL will serve as a great platform for the same:”Every player desires to do well and to achieve great feats and represent his nation in an International Cricket Council (ICC) tournament. But, I believe that the 2019 World Cup is a little too far in the future. The main thing for me right now is to keep it simple and not to repeat the same mistakes as I have done in the past. My aim is to take this opportunity of playing in the PSL to make a case for the national team, but then I also know that to burden myself by that pressure is counter-productive and not fair to Karachi Kings as well. For now, I am focusing on the present and I am trying my best to stay in-form and consistent. Insha’Allah if I continue like this, then I will automatically make a case for the national side which would be an excellent outcome for me,” he concluded. 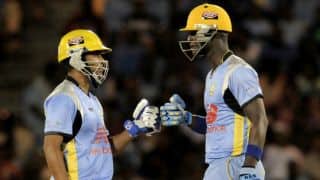