It was a crucial match for Punjab but they were unable to get any points from the match.

Varun Sood, who picked up a total of six wickets in the match, said the pressure was on Punjab throughout the match. Delhi beat Punjab by a 90-run margin in the Group B match played at Dhruv Pandove Stadium, Patiala.

Punjab needed 179 runs to win in the second innings, but were bundled out for a mere 88 in just 33.4 overs. Sood took two wickets, while Manan Sharma grabbed a five-wicket haul.

“We didn’t plan anything but focused on bowling a specific line and length as the ball was turning. We made a positive start to the match as we made around 250-odd runs in the first innings and we thought it was a challenging score. Pressure was on Punjab from the beginning. We bowled well, and the wicket was assisting the bowlers,” Sood said moments after Delhi won the match.

It was a crucial match for Punjab but they were unable to get any points from the match, leaving them stranded at 19 points. On the other hand, Delhi will now play in the quarter-finals. “It is a good feeling. We would like to continue this performance in the knockouts too. Our batting and bowling departments have been doing well,” said Sood when asked about Delhi’s performance.

Sood has taken 27 scalps in the eight Ranji Trophy matches played so far. He grabbed headlines when he picked a 10-wicket haul against Gujarat in Delhi. “It is my second season with Delhi and I have been performing both with the bat and ball for my team. I would like to carry on the performance by team,” Sood concluded. 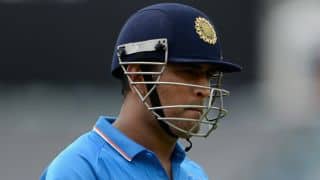