For Punjab, Rajwinder Singh (3/62) and Sarabjit Ladda (3/90) chipped with three wickets each.

In reply to Punjab’s first innings total of 273, Haryana were all out for 283 in their first essay. At stumps, Punjab were 21 for no loss in their second innings with openers Manan Vohra (11) and Jiwanjot Singh (10) at the crease.

Resuming on 19 for one, Haryana lost Yuzvendra Chahal early at a personal score of seven, an addition of just six runs to his overnight score of one. Other overnight batsman Abhimanyu Khod, resuming on 10, however played well as he went to score 42 runs and share two important partnerships of 43 and 42 with Sunny Singh (24) and Sachin Rana (35) for the third and fourth wickets, respectively.

But after Khod and Rana’s dismissal in quick succession, Haryana lost three more quick wickets to be struggling at 173 for seven. It was the duo of tailenders Amit Mishra (40) and Yadav, who brought the team back on track with a solid 86-run stand for the eighth wicket to take Haryana’s score past 250 runs.

While Mishra’s knock came off 69 balls studded with four boundaries and a six, Yadav took 104 balls for his unbeaten 51 including seven fours.

For Punjab, Rajwinder Singh (3/62) and Sarabjit Ladda (3/90) chipped with three wickets each. 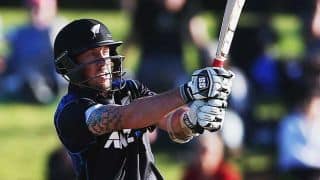 New Zealand 145 for five after 35 overs against Pakistan