India discard Yuvraj Singh‘s 59 was the only saving grace for Punjab as a six-wicket haul by off-spinner Jayant Yadav helped Haryana bundle them out for a mere 273 in their first innings on the first day of a Ranji Trophy Group A match at Patiala on Sunday. At stumps on Day One, Haryana reached 19 for one with Abhimanyu Khod (10) and Yuzvendra Chahal (one) at the crease.

Spin duo of Yadav (six for 85) and Amit Mishra (three for 72) wreaked havoc as they shared nine wickets between them to skittle out Punjab for less than 300 runs.

Yuvraj then top-scored with a 99-ball 59 with the help of six boundaries and a six, and also shared a valuable 84-run stand with Gurkeerat Singh (43) for the fifth wicket to take Punjab past 240-run mark.

But Yuvraj’s dismissal triggered a collapse and from 241 for six, Punjab could add just another 32 runs, losing four wickets in the process to be all out for 273.

In reply, Haryana lost Avi Barot’s (8) wicket cheaply. But Khod and Chahal ensured there was no further damage on the day. 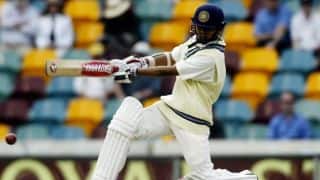