The Quadrangular A team series which is being played at Bengaluru in place of Vijayawada because of torrential rains in Vijayawada, kicked off today. India B beat South Africa A in a rain-curtailed game by 30 runs on the back of a good batting performance churned out by captain Manish Pandey who scored a vital 95*.

Youngster and U-19 World Cup star performer Shubman Gill opened the batting with the prolific scorer in the first-class circuit, Mayank Agarwal. Right-arm fast bowler Dane Paterson clipped out Agarwal and Deepak Hooda in quick succession and had India B struggling at 22/2 in 5.3 overs. India B were chasing a D/L revised target of 220 runs off 45 overs due to rains after South Africa A folded up for 231 in 47.3 overs while batting first.

Gill did a good job of battling it out with the skipper Pandey and they added 88 runs from just 76 balls. India B went on to chase down the target with 27 balls to spare as they reached 214 for five before the heavens opened up, forcing the umpires to declare the result by applying D-L method.

Earlier, South Africa B were 231 all out in 47.3 overs with Senuran Muthusamy top-scoring with a 55 and he was ably supported by Farhaan Behardien (43) in the match played at Alur, 40 kilometers from Bengaluru. Prasidh Krishna bagged four wickets for 49 and leggie Shreyas Gopal claimed three wickets for 42 in 10 overs. Sidharth Kaul, Navdeep Saini and Deepak Hooda chipped in with one wicket each. 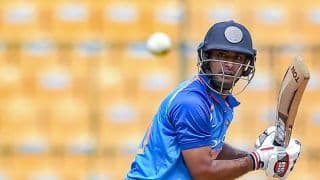