Dane Paterson starred with the ball, picking up a five-wicket haul South Africa A beat India A by four wickets to register their first win of the ongoing one-day quadrangular series in Bengaluru.

Dane Paterson starred with the ball, picking up a five-wicket haul South Africa A beat India A by four wickets to register their first win of the ongoing one-day quadrangular series in Bengaluru.

In another match of the series, Australia A beat India B by five wickets via DLS to enter the final where they will face India B. Both South Africa A and India A finished the tournament with nine points each.

Paterson took 5/19 as India A were bowled out for 157 in 37.3 overs. Opener Pieter Malan top-scored with 47 as the visitors overhauled the target in 37.4 overs to win with a bonus point.

After opting to bowl first, Paterson and Robert Frylink (2/36) razed the India top-order inside 10 overs, reducing them to 31/4. Suryakumar Yadav was out caught behind in third over, bowled by Frylink before Paterson cleaned up Abhimanyu Easwaran for a 10-ball duck.

By the time 16 overs were bowled, half the Indian side was back in the dressing room before Sanju Samson (36 off 42) and Deepak Chahar (38 off 42) arrested the slide. They added 64 runs for the seventh wicket but Paterson broke the stand with the scalp of Chahar. He then proceeded to wipe the tail to complete his fifer.

In reply, South Africa A began cautiously with the openers adding 37 runs between them before Khaleel Ahmed struck, removing Gihahn Cloete on 24. However, they kept on building little partnerships, steadily edging closer to the target.

A faint hope was raised when they lost three wickets for the addition of 26 runs in the middle overs. However, Farhaan Behardian (18* off 20) and Frylink (15* off 9) ensured there was no late drama with South Africa scoring 159/6 to seal a comfortable win. 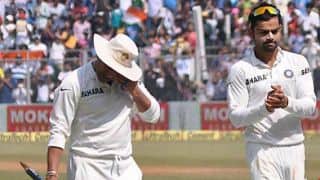 Virat is the backbone of Indian batting and is close to Sachin, feels former off-spinner Saqlain Mushtaq 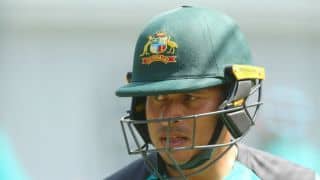 Quadrangular Series, India B vs Australia A: Jack Wildermuth carries Australia A over the line in a close game