BCCI has proposed to host a day-night Test at Eden Gardens against Bangladesh, starting November 22.

Soon after Sourav Ganguly took charge of the Board of Control for Cricket in India (BCCI) president, the Indian cricket board has put forth a proposal before Bangladesh to play a day-night Test at the Eden Gardens in Kolkata, starting November 22.

However, as per a Times of India report, the BCCI will need to sort out a few logistical issues, the biggest being the arrangement of the quality pink balls which will work in the Indian conditions.

The BCCI’s technical committee, in 2016, had run a pilot project under the now BCCI president Ganguly where the Duleep Trophy was played with the pink balls. However, the said experiment was not very encouraging.

The official reason given, though, was the lack of interest from the broadcasters to telecast games. However, the sources close to the development indicated that the wet conditions in early September were a deterrent.The final was to be played with the pink balls but the board did a U-turn.

BCCI, first used the SG balls before moving to the Dukes balls. According a BCCI official the balls started to lose colour and started getting soft after the first 20-30 overs.

“The Indian grounds are not as soft as the ones in England or Australia. They are rough and the balls didn’t retain shape and colour after 20-30 overs,” a senior BCCI official was quoted as saying by TOI.

With the BCCI being unsure about the SG balls’ quality and if India were to play a day-night Test against Bangladesh, importing pink balls – Dukes or Kookaburra – remains an option. The BCCI official said that there’s a need to have a “library” of balls.

“The board will need over 24 new balls at least to give to the teams for practice and play the match. Then there’s the need to have a library where you have replaceable balls at any point. That’s the tough part,” the official said. 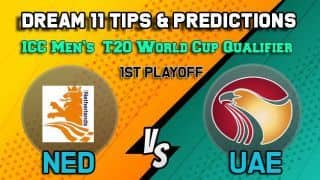