The CSA also announced the 15-man squad for the upcoming two-match Test series against Sri Lanka, which will be played over the traditional Boxing Day and the New Year's windows.

Cricket South Africa on Friday named wicketkeeper-batsman Quinton de Kock as South Africa’s captain in red-ball cricket for the 2020/2021 season. The southpaw will take over the charge from Faf du Plessis and lead the Proteas in red-ball series against Sri Lanka, Pakistan and Australia respectively. Earlier this year, De Kock was appointed the skipper of South Africa in limited-overs cricket as the team is going through a rebuilding phase after the underwhelming show in 2019 ODI World Cup.

CSA Convenor of Selectors Victor Mpitsang is confident of de Kock’s leadership capabilities and said that the southpaw is happy to continue with the role and comfortable with the balance of the workload.

“We are satisfied, as the national selection panel, with the decision that we have made to ensure continuity within the team, while we work towards making the best decision for its future without the pressure of time constraints. Quinton (de Kock) is happy to continue in the role for the next season and is comfortable with the balance of the workload and we back him fully as a captain,” said Mpitsang.

“We are also pleased with the leadership group in the team and are cultivating a strong individual leadership culture at the same time, so that the team produces a sustainable stream of potential captains for the future,” he added.

The CSA also announced the 15-man squad for the upcoming two-match Test series against Sri Lanka, which will be played over the traditional Boxing Day and the New Year’s windows. The fixtures will form part of the ICC World Test Championship (WTC).

Uncapped Sarel Erwee, Glenton Stuurman and Kyle Verreyne have been included in the squad to play two Tests against Sri Lanka, starting at Centurion on December 26, while Wiaan Mulder returns from injury. Kagiso Rabada and Dwaine Pretorius were not named, but could be added in the coming days as their recovery from injuries is monitored, said CSA. 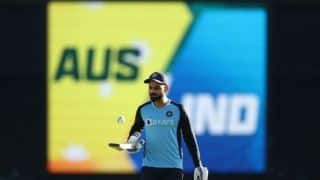