R Ashwin's reaction came a day after the ICC announced that the TV umpires will call the front-foot no-balls in ODIs during the Men's Cricket World Cup Super League.

India’s premier spinner R Ashwin wants technology to be used to track the batsman at the non-striker’s end who is backing up too far, which he believes is an unfair advantage for the batting side.

He has always been consistent about his stand and suggested that the technology used to check front foot no balls can be also used to keep a tab on non-strikers backing up even before the bowler reaches the popping crease.

“Just hope that technology will see if a batsmen is backing up before the bowler bowls a ball and disallow the runs of that ball every time the batter does so!! Thus, parity will be restored as far as the front line is concerned,” Ashwin put forth his view point on a series of tweets.

Ashwin has been one of the big advocates of “Mankading” and his dismissal of Jos Buttler during Kings XI Punjab’s IPL encounter against Rajasthan Royals grabbed headlines last year.

“Many of you will not be able to see the grave disaparity here, so let me take some time out to clarify to the best of my abilities.

“If the non-striker backs up 2 feet and manages to come back for a 2, he will put the same batsmen on strike for the next ball,” he said.

“Putting the same batsmen on strike might cost me a 4 or a 6 from the next ball and eventually cost me 7 more runs instead of may be a 1 and a dot ball possibility at a different batsmen. The same will mean massively for a batter wanting to get off strike even in a Test match,” he explained elaborately.

For Ashwin, its all about restoring the balance between bat and ball in a game that is loaded heavily in favour of willow wielders.

“It is time to restore the balance in what is an increasingly tough environment for the bowlers,” he said.

“We can use the same tech that we are proposing for a no ball check 120 balls in a T20 game,” said Ashwin. 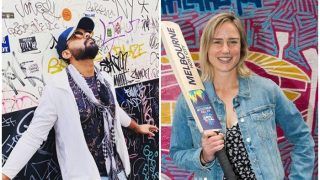