India s victory over New Zealand in the second Test by 178 at Eden Gardens, Kolkata makes them top side in ICC Test rankings.

India s victory over New Zealand in the second Test at Eden Gardens, Kolkata by 178 runs makes them top side in ICC Test rankings. Earlier it was Pakistan at the top of ICC rankings after they beat England in the fourth Test at Lord s on August 14, 2016. After that, India were expected to take over the top spot of the ranking by beating West Indies in the fourth Test of the series but that didn t happen and Pakistan continued with its number one rankings. The fourth Test between India and West Indies at Port of Spain was rain marred on day one and because of poor arrangements, the outfield of the ground remained wet for rest of the four days, which led to no play and the result was draw.

It s a fact that ICC takes a bit time to update the rankings but this time they did it quickly and notified the viewers by tweeting that India are now the top team in ICC Test Rankings.

Meanwhile, Radio Pakistan, which is known as National Radio of Pakistan, tweeted that a resolution has been passed to felicitate Pakistan Cricket Team for achieving the number one Test rankings which is now no more with them.

Just after that tweet from Radio Pakistan, twitterati started trolling them as India are now the new number one Test team. Here are some hilarious tweets.

@RadioPakistan takes 30 mins to dethrone you. And now start the denial process. Get western media and start the donkey parade #deniers

@RadioPakistan while pak was busy celebrating no 1 in tests..india quietly took away the throne!! surgical strike again! Avanish (@avanishmalhotra) October 3, 2016

@RadioPakistan So your senate created a record for passing a resolution with the least validity period. Kudos… Kudos

India will play the third Test of the series against New Zealand at Indore, which will start from October 8. 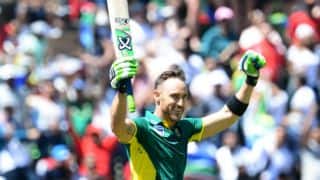