Prithvi Shaw and coach Rahul Dravid addressed the media on Monday after their arrival from New Zealand.

Prithvi Shaw and coach Rahul Dravid addressed the media on Monday after their arrival from New Zealand. Dravid talked on various topics ranging from team’s preparation to their road ahead of the tournament. Nadeem Khan, Pakistan Under-19 team manager had mentioned Dravid’s visit to the Pakistan dressing room to boost the morale of the team: “It was a very nice gesture, only confirming Dravid’s stature in our eyes.”

The Pakistan team management lauded the Indian players, mentioning how the youngsters set a benchmark for most Pakistani players. Dravid also added Pakistan had some good talent in their side: “We had some great talent and they were very appreciative of our cricketers as well. Their coaches mentioned to me so many times that the standard of cricket we have seen your guys play is a benchmark for a lot of us. They were very effusive in their praise and I also acknowledged the fact that they had some very good talent as well.” 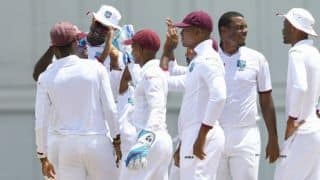