Known to accord fitting send-offs to the seniors, it remains to be seen if India skipper Mahendra Singh Dhoni has any plans for Rahul Dravid, who will bring the curtains down on his illustrious ODI career after the final one-daer against England here on Friday. 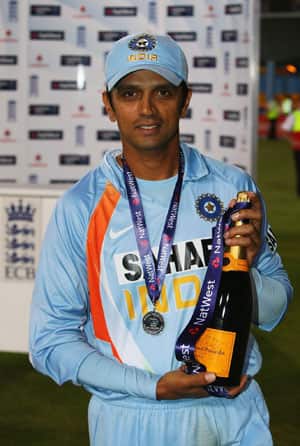 Known to accord fitting send-offs to the seniors, it remains to be seen if India skipper Mahendra Singh Dhoni has any plans for Rahul Dravid, who will bring the curtains down on his illustrious ODI career after the final one-dayer against England here on Friday.

Dhoni’s gestures in 2008, when former captains Sourav Ganguly and Anil Kumble walked away towards their cricketing twilight, spoke volumes about the man.

He let the combative Ganguly lead the side briefly against Australia in the final Test in Nagpur, while carried Kumble on his broad shoulders. He also made sure that India’s greatest wicket-taker was there at the podium to receive the trophy after they won the series 2-0.

Though Dravid has so far failed to set the stage ablaze in the final ODI series of his career, managing a meagre 55 runs at 13.75 from four matches, it’s his overall tally — 10820 runs from 343 one-dayers at 39.06, which commands utmost respect.

Dravid is the second highest scorer ever in Test cricket but hasn’t done badly in one-dayers also, in which he is seventh in the all-time list, ahead of players like Brian Lara and Mahela Jayawardene.

This will also be the first and last time he would represent India in a match in the Wales’ capital.

Dhoni, during his sterling career, has always made at least one gesture to honour a senior cricketer who has announced retirement from international cricket.

After the World Cup triumph, arguably the greatest moment of their lives, Dhoni and his men chaired Sachin Tendulkar on their shoulders for a victory lap of the Wankhede Stadium in Mumbai. But as far as Dravid is concerned, the India skipper has not given any indication of whether there is any plan to give the veteran a fitting send-off.

It is ironical that Dhoni had a hand in showing Dravid the door from the ODI team for the first time during a series against Australia in 2007.

Dravid announced his retirement from One-day cricket soon after he learnt of his inclusion in the Indian side for the five-match series against England, which is coming to an end.

Besides showing respect to his senior, Dhoni could have three additional reasons for honouring Dravid. He became the Indian captain only after Dravid refused to go to South Africa for the inaugural Twenty20 World Cup in 2007.

Dravid later also resigned from Test captaincy, which paved the way for Dhoni to get the honour of leading India in the longer version of the game as well. The second reason could be the affiliation the two have as wicketkeepers of the side.

Dravid often doubled up as a wicketkeeper in One-dayers — most notably during the 2003 World Cup in South Africa — and has 72 catches and 14 stumpings to show for his effort.

The third, of course, is Dravid’s magnificent run in the preceding Test series in which he scored 461 runs with three centuries at an average 76.83. He was the only Indian to salvage some honour in the team’s 0-4 whitewash, which was Dhoni’s first loss ever as captain. (PTI)

BCCI should be brought under govt control: Pankaj Advani