Rajasthan Royals skipper Rahul Dravid lauded his team for their "professionalism" and described the nine-wicket victory over Perth Scorchers in a Group A match of the Champions League Twenty20 as a "clinical" performance. 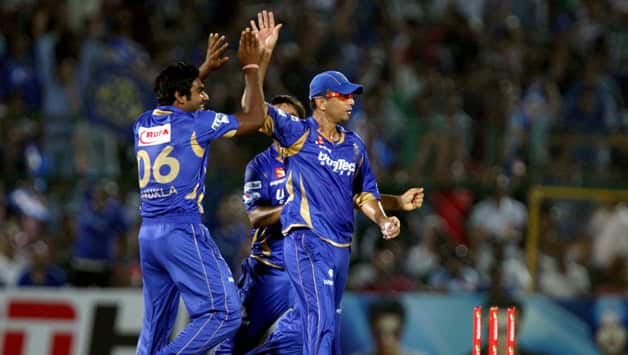 With the victory over Perth Scorchers, Rajasthan Royals have confirmed their place in the semi-finals © IANS (File Photo)

Rajasthan Royals skipper Rahul Dravid lauded his team for their “professionalism” and described the nine-wicket victory over Perth Scorchers in a Group A match of the Champions League Twenty20 as a “clinical” performance.

“It’s nice to win and play well. It was a really good and clinical performance today [Sunday]. We can always improve and we can keep getting better, we also take a lot of satisfaction from the match today,” said Dravid after the match.

The Royals didn’t put a foot wrong in the match as they first dismissed the Scorchers for 120 and then returned to overhaul the target with 3.3 overs to spare.

“Our bowlers pulled it back brilliantly today, like Jimmy, Coops and a lot of professionalism from Samson and Rahane who batted very well,” Dravid said.

“Our next game is a big one and Otago is playing very good cricket, they are the team in form.”

Ajinkya Rahane, who was the top-scorer for Rajasthan, said: “It was a really nice pitch, good for bowlers and batsmen. This wicket was not fast compared to what we played against Mumbai Indians but the ball was doing a bit and holding its line.

“It was slightly tough initially but was easier later to bat on. I enjoy batting with Sanju, we were just talking about positive cricket while batting. We just need to concentrate on the next game and stay positive.”

Kevon Cooper, who laid the foundation for the win with a four-wicket haul to help his team bundle out the Scorchers for 120, said: “I’m happy to come out here and bowl well and give my team a chance of winning.

“The yorker is something I practiced a lot, it’s very important in this format. It’s great to play with players like Dravid, Watson and we sit and plan every game with the support staff. We wanted to play good cricket here and happy to do that,” he added.

After suffering their third loss in as many matches, Perth skipper Simon Katich said they were around 60 runs short and their bowlers too failed to contain the run.

“We are learning the hard way, we didn’t get many partnerships going and were about 50-60 short there. Our bowlers tried their best but nothing worked. We presented four caps the other day and that in itself is tough.

“Hopefully we’ll get a fair bit of this before the Big Bash. We’ve seen how big the standard is here form the Big Bash and it’s a different ball game. We’re gonna have to try harder in the next few days,” he added.