Dravid and Crowe also reiterated their opposition to ICC trimming the 2019 World Cup from 14 to 10 teams.

Sydney: Cricket legends have called for restoring the balance between bat and ball, including easing fielding restrictions and regulating bat thickness, in the One-Day International (ODI) format.

“Once you get a piece of bat on the ball, it disappears. There are a lot of slow-motion replays where you see a batsman hitting the ball, you can see the bat actually twisting in their hands. Obviously not hitting the ball well, and the ball disappears nonetheless. That is one aspect that has to be looked into. If the ICC do nothing else, they have to look at that,” West Indies pace legend Holding said.

Australian great Chappell said thick bats have tilted the balance heavily in favour of the batsmen.

“Sooner or later, a bowler or an umpire is going to getting seriously hurt. Because the ball is getting back so quickly they have got no time to react.”

The field restrictions that allow only four fielders outside the circle in non-Powerplay overs and the two new balls have been the talking points of this World Cup. Chappell wanted most of the restrictions removed and Dravid and Holding agreed with him.

“As far as restrictions are concerned, I like as few as possible,” Chappell said.

Crowe brought up the issue of the safety of the crowds while Dravid seemed worried about the net bowlers.

“One of the people who I really worry for is net bowlers,” Dravid said.

“I have worked in the IPL. We have young kids who bowl in the nets. All university kids, college kids. All 17-, 18-, 19-year-olds bowling in the nets, and you have the likes of Shane Watson and Chris Gayle batting in the nets and practising T20 batting. I am amazed no one has seriously got hurt.”

Coming back to the size of bats, Holding said, “I don’t know if the ICC is afraid of the people who manufacture the bat to say exactly what has to go into a bat.

“They have limited the width of the bat, but they have never limited the depth. There used to be a sweet spot on the bat years ago. Actually one company – I don’t want to name it – used to have a spot on the back of the bat, which was pretty much parallel to the one on the front of the bat. Now that would have to cover the entire bat because there is no sweet spot, there is a sweet bat.”

Dravid and Crowe also reiterated their opposition to ICC trimming the 2019 World Cup from 14 to 10 teams.

“If you take away these world events from a lot of these nations, I’m afraid you actually kill the game,” Dravid said. 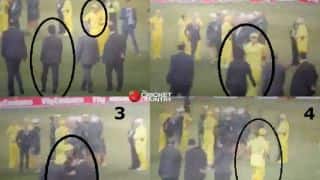