Batting prodigy Shubman Gill has opened up on how Rahul Dravid has taught him the value of patience.

Batting prodigy Shubman Gill has opened up on how Rahul Dravid has taught him the value of patience which in turn has helped him become more consistent and score hundreds.

Dravid has been tasked with coaching the next crop of India cricketers through his roles with various youth teams. He was the coach when India won their fourth ICC U-19 World Cup title in New Zealand where Gill was adjudged as player of the tournament.

Since then, Gill has scored runs for his Ranji team Punjab, India A and in 2019, went on to make his senior team debut as well.

Gill, 19, said the India batting legend is always open to have discussions and it was Dravid who told him to use aerial shots judiciously.

“My association with Rahul Dravid began more than two years ago,” Gill told The Indian Express. “As a youngster, I would always watch his batting on television and discuss the same with my father too. As a coach, he understands my game well. The good thing is, if you want to discuss something with him, he is always available.”

He continued, “Since my childhood days, I have practiced aerial shots and I like playing those. In 2017, when we were playing ODIs against England Under-18 in Mumbai, I got out cheaply in the first two matches after playing aerial shots. I made 35 and 37. Rahul sir told me to use the aerial shots judiciously and to hit them only once I am well set. I followed his advice and made 138 and 160 in the next two matches.”

He said Dravid, who scored 24,208 runs during his international career, never speaks of his achievements. “What I have learnt from him is how to be patient and calm. At times he gives inputs with regards to batting if he sees something. But at the same time, during tours I constantly talk to him. He never speaks about his knocks or his feats,” he said. 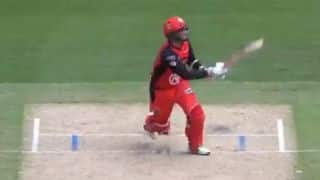