India A and U19 coach Rahul Dravid will not be in charge of the U23 squad that will be taking part in the ACC Emerging Trophy scheduled to be held in Bangladesh.

New Delhi: India A and U19 coach Rahul Dravid will not be in charge of the U23 squad that will be taking part in the Asian Cricket Council‘s (ACC) Emerging Trophy scheduled to be held in Bangladesh from March 25 to April 5. While Dravid has been the coach of all junior national teams but BCCI has decided that it will allow the former India captain to join his franchise Delhi Daredevils, who will start with their IPL camp in capital tentatively on March 28. Technically, Dravid is well within his rights to join his IPL franchise as all Indian support staff’s contracts end on March 31 while the Emerging Trophy will end on April 5. Rahul Dravid says coaching is more challenging but easier than playing

April and May are the two months when any support staff — be it coach, physio or trainer are free to offer their professional expertise to other sporting entities or to be precise IPL franchises. The IPL starts on April 5 and BCCI has exempted all IPL players from the Emerging Cup. The ACC tournament has provision to include four senior international players for the Test playing nation but with IPL round the corner, BCCI could not have released the top two rungs of India players, all of whom have IPL contracts.

According to well-placed sources in the BCCI, in all likelihood the National Cricket Academy coaches, WV Raman OR Narendra Hirwani will be in-charge of the team during the 10-day limited overs tournament. “The Emerging team falls under NCA purview. Dravid is unlikely to go for this Dhaka meet. We have our NCA coaches and from among them we will select the coach for the India U-23 team,” a senior BCCI official told PTI on conditions of anonymity. Rahul Dravid, Sourav Ganguly s multiple roles likely to be questioned by SC-appointed CoA

Only those domestic performers with no IPL contracts have been selected for the tourney. The likes of Prithvi Shaw, Abhimanyu Easwaran, Mayank Dagar are considered to be the Gen-Next of Indian cricket. Baba Aparajith will be leading the side despite a modest domestic season so far while brother Indrajith, who missed the bus despite 600 plus runs in the longer version.

The tournament features most of the players who have done well during the group league stage of the Vijay Hazare Trophy. The likes of Rishabh Pant and Ishan Kishan have not been chosen for the tournament simply because they would all be with their respective IPL sides in the pre-tournament camps. The last time when Emerging Trophy was held, India won the tournament with Surya Kumar Yadav being the captain of the side. Michael Clarke: Good decision by India and Australia to move ahead from DRS controversy 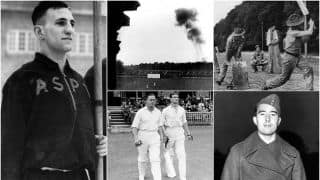 A Messerschmitt up your arse and other War Stories