With a packed schedule ahead, Dravid hoped Zaheer would walk away from the game gracefully.

Former India captain Rahul Dravid feels it is time for Zaheer Khan to start deliberating on his future as it would be difficult for the senior pacer to survive the rigours of five Test matches when India tour England later this year.

Zaheer, who made a comeback to the Test team during the disastrous tours of South Africa and New Zealand after a long injury lay-off, failed to trouble the batsmen.

Although he bowled 51 overs and took a five-wicket haul in the second innings of the Wellington Test against New Zealand recently, he looked far from impressive.

“Can he survive five Test matches in England? I am not so sure,” Dravid was quoted as saying by ESPNcricinfo.

“I think it is a question he deeply needs to ask himself.

He doesn’t want to end up being someone who struggles his way through to the end. It can be really hard. And we have seen, he struggled to back up time and time again in these two series. So that’s an issue he needs to consider, Indian selectors need to consider,” he said.

With 311 wickets in 92 Tests, Zaheer is the second most successful Indian seamer after Kapil Dev but his career has been plagued by injuries.

Dravid said he would hate to see Zaheer end his career on a low.

“He has been a great bowler for India, arguably the finest India fast bowler since Kapil Dev. I would hate to see Zaheer Khan end his career bowling 120-125 kph and limp away from international cricket.

“He has done a great job to get himself fit for these two series and to be fair, he has bowled well in patches, he has bowled consistently,” said Dravid.

Talking about Indian spinners, Dravid said in the past also they had struggled in overseas conditions and people need to be patient with them.

“We will need to show some patience with our spinners, whether it is Ravichandran Ashwin or whether it’s (Ravindra) Jadeja, it’s early days for both in international cricket,” he said.

“We have seen some greats of Indian cricket, including Anil Kumble and Harbhajan Singh take a long time to get used to bowling with a Kookaburra ball in overseas conditions.

“I thought we were a little bit impatient with Ashwin. We haven’t given him as much a run as I would like, so I think there is an opportunity for him to get back into the side and play a few more games. He will only learn if he plays more games,” insisted Dravid. 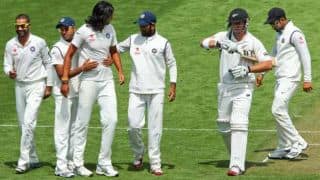 MS Dhoni is right in saying Indian team has improved South Africa vs Australia, Past encounters — Part 7 of 7