The Honorable Supreme Court appointed Committee of Administrators (CoA) on Saturday, February 3, 2018, announced cash rewards for the victorious India U19 team that won the ICC U19 World Cup in New Zealand after beating Australia in the final.

The following is the breakdown of prize money.

Members of India U19 team INR 30 lakhs each

Members of the Support Staff, India U19 INR 20 lakhs each

Mr. Vinod Rai, Chairman, CoA, said, I congratulate the U19 team who have made the country proud. Head Coach Rahul Dravid played his cricket with sincerity and it was pleasing to see the boys uphold the value. They have been fantastic athletes and even better ambassadors. The boys have done so well, and I am sure they will work hard and climb the ladder and represent the senior team in the future.

Ms. Diana Edulji, Member, CoA, said: “The consistent performance is a testimony to the fact of BCCI s initiative in nurturing the talent and providing them an environment to the youngsters and perform to their potential. I congratulate Rahul Dravid and his team for returning home with the glittering ICC World Cup. 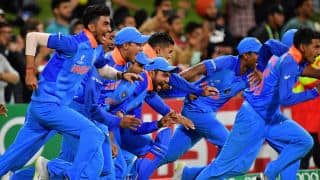