Rahul Dravid: Watching VVS Laxman bat made me feel inadequate as a cricketer

Rahul Dravid: Watching VVS Laxman bat made me feel inadequate as a cricketer

Rahul Dravid was made the honorary member of the Madras Cricket Club on Monday.

Former Indian cricketer Rahul Dravid revealed that he was embarrassed to watch teammate VVS Laxman bat on the other end during a ceremony at the Madras Cricket Club (MCC) Monday evening. He once again awed the audience with his humbleness when he said that he hated to watch the 376-run partnership between him and Laxman against Australia at Eden Gardens in 2001, that had turned a losing match into one of India’s famous victories in the whites, because it made him feel “inadequate” as a cricketer. READ: When Brendon McCullum SMSed Alastair Cook extending support during tough times

The India-A coach was felicitated as the honorary member of the MCC.

According to a report from Cricbuzz, Dravid said,”I have a DVD of that particular Test at my home, but never watch it. I get embarrassed watching Laxman bat. The clippings were played today and when I saw Laxman hit a Shane Warne delivery which was way outside leg-stump towards covers – it made me feel inadequate as a cricketer.”

Even after the end of their international careers, the Dravid-Laxman partnership is still on. Since Dravid was coaching the India-A side, he had packed just casual clothes with him but for the function at MCC, he needed to wear formals. “So who do I call in to get a tie and jacket that will fit me in the last minute? Laxman, of course! I sent an SOS to him, and here I am wearing a stylish blazer and tie. Whenever the team has needed him, he has been there,” he added. READ– Virat Kohli and I should not be compared: Ahmed Shehzad

Meanwhile, Laxman was not behind to express his love and respect for the former Indian skipper. “He has always been an inspiration for me and always saw him trying to improve his game. I am pleased that he has taken up the job of mentoring the U-19 and India ‘A’ and would wish to see him do so with the senior side in the near future,” Laxman said. 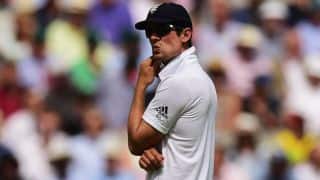