Rain marred the second session and enforced early tea break with South Africa hanging at 258 for 8 on Day Two of the third and final Test in Hamilton.

Rain marred the second session and enforced early tea break with South Africa hanging at 258 for 8 on Day Two of the third and final Test in Hamilton. New Zealand were right on money as they bagged another wicket in form of Keshav Maharaj with Neil Wagner getting his first as the new ball was taken, after a series of luckless DRS and conceding way too many runs in the first session. Meanwhile, Quinton de Kock is on the brink of securing his first century in this series as he remained unbeaten on 73 along with new batsman Kagiso Rabada at 4 respectively. The second session lasted for 30 minutes. Full Cricket Scorecard: New Zealand vs South Africa, 3rd Test at Hamilton

A delayed second session began with Maharaj smashing a boundary through the covers off Mitchell Santner. However, he succumbed to the New Zealand bowlers and nicked Wagner s bouncer to BJ Watling, falling for 11. With couple of runs from de Kock off Jeetan Patel, South Africa moved to 250 by the 80th over. New Zealand were back to the safe side not just with the new ball taken by the 81st over but also refilled their reviews. Colin de Grandhomme was speeding at 119 kph; however, a storm forced the players to move back to the pavilion thereby leading to early tea.

Earlier, recalled pacer Matt Henry claimed 4-for securing wickets of Temba Bavuma and Vernon Philander. However, fine fifties from Faf du Plessis and Quinton de Kock boosted the South African morale and took their side beyond the 200-run mark.

At lunch, South Africa were 243 for seven with Quinton de Kock, nursing an injured finger, on 66 and Maharaj on 5. As the threatened rain held off, South Africa put on 120 in the session which was extended by 30 minutes to compensate for time lost on the Day One.

Bavuma was through his pull shot too early and the ball hit the toe of the bat and flew to Jeet Raval at first slip. De Kock and du Plessis 42-run stand for sixth-wicket repaired the damage done. De Kock and Patel s rivalry took a new turn in Hamilton when the former smashed a six and 2 fours to force him out of attack.

But there was one stunning catch that will go down the history of best catches. Mitchell Santner was called in the 62nd over and in his third delivery Tom Latham plucked du Plessis for 53 leaving him spellbound. Latham anticipated the South African skipper was lining up to sweep the left-arm spinner and was already moving to his right before the ball was hit. That catch left a smile on umpire Bruce Oxenford as well.

After taking the du Plessis catch, Latham was in the action again at second slip to snare Vernon Philander off Henry for 11. During Philander s brief stay, he not only completed 1,000 Test runs but also became the sixth South African to complete 1,000 Test runs and 100 wickets. 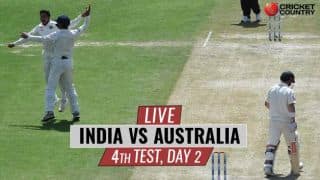 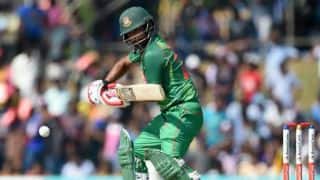