Rajasthan are a very dangerous side: Gilchrist

Rajasthan are a very dangerous side: Gilchrist

Kings XI Punjab may be riding high on confidence after the back-to-back wins, but skipper Adam Gilchrist is wary of their immediate rivals Rajasthan Royals, who according to him are a "very dangerous side". 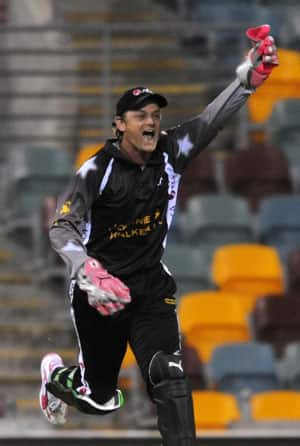 Gilchrist said Rajasthan Royals are a very dangerous side.

Kings XI Punjab may be riding high on confidence after the back-to-back wins, but skipper Adam Gilchrist is wary of their immediate rivals Rajasthan Royals, who according to him are a “very dangerous side”.

“Rajasthan Royals are a very dangerous side, a difficult team to play. You are never certain what (playing) eleven is going to walk on to the field. Rajasthan skipper Shane Warne always springs surprises as he thinks a lot about the make up of his team,” Gilchrist told reporters at a pre-match press conference here today.

With the likes of Warne, Shane Watson, Shaun Tait, Ross Taylor, Rahul Dravid and Johan Botha, Gilchrist said Rajasthan have got a talented bunch of Indian and overseas players in the side.

The Punjab skipper also heaped praise on 41-year-old Warne, saying he had seen him bowl on different surfaces over the years all over the world and whatever the conditions may be, he always expects him to play a “big part” in the game.

The Australian spin legend led Rajasthan Royals to title win in the inaugural edition of the tournament in 2008 while Gilchrist also won the title for his former franchise Deccan Chargers in 2009.

The 39-year-old wicketkeeper-batsman said that the team is high on confidence after their back-to-back comprehensive wins against Chennai Super Kings here and Deccan Chargers in Hyderabad.

“It’s a great recovery after our first match (against Pune Warriors), in which obviously we didn’t play particularly well. It’s a turnaround and we put together two decent performances, which was pleasing. That is all we can ask for. Obviously the objective now is to keep replicating that and maintain consistency,” he said.

The two sides have a contrasting story so far as Rajasthan have lost direction after making a fantastic start with two wins while the Punjab have shrugged off the opening match defeat to present themselves as a formidable side now.

The Punjab side is on a roll, thanks to their new batting hero Paul Valthaty, who is in red-hot form. The revelation of Valthaty as an explosive opener has given the Punjab top-order a lot of strength and the big hitting batsman has caught all the attention with his sensational knocks against Chennai (120) and Chargers (75).

Gilchrist said his opening partner Valthaty’s performance in the tournament has been of the “highest class” so far.

“His performance has been of the highest class. It is quite extra-ordinary the way he has played,” he said about the 27-year-old Mumbaikar

With Valthaty and he himself showing great form, Gilchrist said he is not concerned about the fact that the middle-order has not been tested yet.

“That’s not the concern for us, at the moment, because if we reach game 12 in the same situation that means we have done really well. It’s a long tournament, three of our games were spread a little bit and we have got 11 more to go and I think that everyone will get tested at some stage and will get an opportunity to perform well,” he said.

The KXIP skipper was also full of praise for his bowlers.

“They did well in the opening game considering the fact our (poor) batting performance (let us down). Hyderabad was a beautiful batting track. At phases of the game, the bowlers did well to restrict the opposition and the targets were achievable for us.

“I am not concerned about any part of our game in particular, but that doesn’t mean we can’t improve either. We got things to work on and we will continue to do that,” he said.

Gilchrist said that KXIP had got a good five day break after their last game and they had enjoyed training sessions here in between and were relaxed and well rested.

“We had a nice relaxing period from our last game. It was a nice break after our back-to-back games and road trip to Hyderabad involved a fair bit of travel. We are really excited and looking forward to tomorrow’s game,” he said.

We would love to have Kirsten as South Africa coach: Morne Morkel