Having comprehensively beaten Kings XI Punjab in a IPL match, Rajasthan Royals opener Ajinkya Rahane said that his team was not thinking about the play-offs stage at the moment and was taking it one game at a time.

Rajasthan won by 8 wkts
Man of the Match: Kevon Cooper 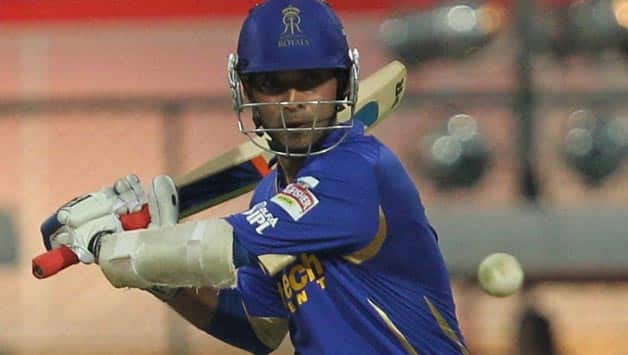 Having comprehensively beaten Kings XI Punjab in a IPL match, Rajasthan Royals opener Ajinkya Rahane said that his team was not thinking about the play-offs stage at the moment and was taking it one game at a time.

The visitors inched closer to securing a play-offs berth with a eight-wicket win at the PCA Stadium.

“We are on 18 points right now, but we are not thinking of play-offs. We just wanted to play one game at a time. I think we play against Chennai in Jaipur, that is another important game and we just want to focus on that,” Rahane who hit an unbeaten half-century, told reporters after the match.

Kevon Cooper scalped three vital wickets before Rahane shared an unbeaten partnership of 76 runs with 18-year-old Sanju Samson (47 not out) to guide their team.

About the away win, he said, “We are not looking that way, but as I said we are playing one game at a time and we just want to improve day by day and match by match. I think the boys are doing really well and we are playing as a team, as a unit.”

Asked about the selection of the Champions Trophy squad, the 24-year-old said, “No, I am not thinking about that. As I said in my last press conference, selection is not in my hands, that is not in my control. I just want to focus on my cricket and enjoy my cricket and give my 100 per cent to Rajasthan Royals. I never think about selection, frankly speaking.”

Pointed out that there was a lull in his scoring before the CT squad was announced, he replied, “See these things happen in cricket, there is always going to be ups and downs.

As long as you are staying humble and you are looking to improve your game, that’s my job and that’s what I am doing right now.”

Asked about his free-flowing batting, Rahane said, “I am enjoying my game, I am enjoying my batting and I think main thing is that we are playing really well as a team. I am not thinking about that (his selection issue).”

To a query about the Mohali track today, he said, “Yeah, the wicket was a little bit slow, but our bowlers executed very well today. Change of pace they did very well. I think from last three games, the bowling unit is really doing a great job.”

As far as the influence of a veteran player like Rahul Dravid was concerned, Rahane said, “He is really a nice guy. I have always said about him that he is my role model and he backs every player, all 23-24 players, not just eleven guys who are playing. It’s a great experience to play alongside and bat with him.”

Would he call himself a mirror image of Dravid, Rahane said, “I am not sure about that and I am looking to improve from him. I always talk to him about my batting and what to improve and what to focus on.”

Is the franchise putting pressure on Dravid to continue and not leave next year, he said, “I don’t know about that.”